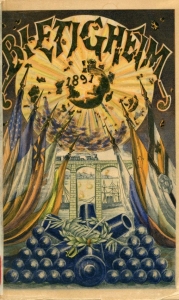 BIETIGHEIM (1886) – Published anonymously in 1886 this work of alternate history accurately predicted some of the actual results and fallout of the coming First World War (1914-1918). Bietigheim is presented as a series of John Minor lectures about world history as seen from “futuristic” 1932.

First off, a summary of the book’s accurate predictions:

a) Tensions between Germany and assorted other nations cause a war that sweeps up many of the Great Powers as well as several other countries.

b) American entry into the war proves decisive.

c) The German side loses the war.

e) In the wake of Germany’s defeat a popular figure arises and rallies millions to him with his plans for the future of Europe and Russia.

Just before the 1890 outbreak of the war Germany and France are pushing their claims to Alsace-Lorraine, Italy is demanding Austria turn over portions of northern Italy, Great Britain and Russia are clashing over preeminence in India and Afghanistan, plus the Slavic nations are feuding with the Ottoman Muslim Turks over their own future and control of the Dardanelles.

In 1890 comes the Reinhardt Incident. A naturalized German-American named Reinhardt visits his parents in Germany and is seized as a deserter by the German government. When Reinhardt is killed resisting arrest America demands an apology plus reparations. Germany stalls and stalls until Queen Victoria offers to mediate the dispute.

While American and German representatives are meeting in London with the Queen and her government as arbitrators, Russia launches a surprise invasion of Afghanistan. The conference is dismissed and most of Europe goes to war.

The Allies consist of Great Britain, France, Spain, Italy, Belgium and the Ottoman Empire. Opposing them are the Imperials, consisting of Germany, Austria-Hungary and Russia.

America turns the tide of the war when it gives up on diplomacy with Germany over the Reinhardt Incident and enters the war on the Allied side in late 1890. Russia uses Afghanistan as a stronghold through which to invade India and also drives the Ottoman Empire out of Constantinople and other parts of Asia Minor.

Russia goes on to seize Cuba from Spain and tries to invade the United States by way of an amphibious assault on New Orleans. The assault fails.

During 1891 large numbers of American troops arrive in France and the Allied armies, led by General Georges Boulanger, begin their advance on Germany. After a slow but steady campaign which takes the Allies all the way to Heilbron the decisive battle of the war takes place at Bietigheim. A million and a half men fight it out in a four-day long battle which results in the surrender of Germany, Austria-Hungary and Russia.

Sizable reparations are imposed on the losers. Germany is forced to return Alsace-Lorraine to France, Russia must withdraw from Constantinople and Afghanistan, while Austria-Hungary is required to pay Italy for the disputed territory.

Amid the economic and social chaos following the war the ages-old Monarchies fall. Queen Victoria dies in 1892 and though Prince Albert Edward (as in real life) is permitted to succeed her on the throne the government is overhauled. The House of Lords is abolished and replaced with a popularly elected Senate. The Church of England is disestablished.

In 1893 the Russian Czar abdicates and by the turn of the century Hungary has seceded from Austria-Hungary to form a republic. Germany and Austria follow suit. In humbled Germany a Reichstag member named Emanuel Winterhoff rises to prominence.

Winterhoff’s vision for the future of Germany and the rest of the world involves government through a syndicate of guilds with membership in a guild being required of all citizens. The elite guild members would be an electoral college selecting a national president and vice president for five-year terms.

The government would control all utilities, transportation and factories. Produce would be distributed communally and all currency would be abolished. The guilds would handle all.

By January 1st of the year 1900 Winterhoff has gathered enough influential supporters to pull off bloodless coups which put his syndicate of guilds in power in Germany, Austria, Russia and Hungary. By 1910 all of Europe has been united in a Guild Republic called the United States of Europe.

The slant of the novel is that this system of Guild Republics is the way toward a virtual brotherhood of man and the end of war and poverty.

Overall Bietigheim is fairly dry and boring. It might appeal to someone who has never before read this type of speculative take on future history but it’s not really in the Top Ten or Fifteen such works. My fellow World War One geeks will enjoy the parts in which the author anticipated real-world developments but I don’t know if others will find this book worth reading.