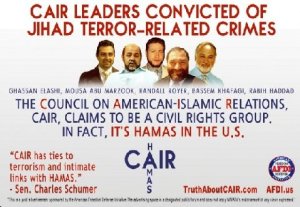 BREAKING NEWS: Muslim fanatics are STILL the ones behind the Boston Marathon Massacre, despite the way the media tried to blame it on Tea Party members.

Yes it was six years ago that the world got another reminder about the blood-soaked, homophobic and misogynistic elements of Islam when the Tsarnaev brothers set off explosives at the Boston Marathon and seemed proud of it.

As if the attack itself wasn’t repulsive enough the American media made it even worse by once again showing their ugly biases.

Remember how they spent a few days implying that since the attack happened on Tax Day it must have been Tea Party members (the favorite bogeymen of the American left) who set off the explosives?

When the culprits turned out to be Muslims those same outlets looked even more foolish than they usually do. Yes, whiny Liberals, I know Fox News Channel and talk radio show conservative bias but all the other news outlets show liberal bias that is at least as blatant. Grow up and deal with it already.

As I pointed out years ago after the attacks were revealed to be Islamic in nature and not tax-related:

I’d like to offer my condolences to America’s Liberals, who were salivating with the desperate hope that the massacre at the Boston Marathon could be blamed on the Conservatives they hate with such irrational fervor. Democratic Party stations like NPR, CNN and others which are the Liberal versions of Fox News Channel and talk radio were lovingly dwelling on the April 15th date (Tax Day), practically orgasming at the thought that Tea Party activists might have chosen that day to become as violent as Liberals pretend they are.

Let’s face it, American Liberals HAD to hope it was Conservatives behind the killings that we now know – and which anyone with common sense could have told – were really yet ANOTHER Muslim terrorist attack. They had to hope that, because American Conservatives are the ONLY people in the entire world that the hypocritical cowards of American Liberalism will unconditionally criticize. American Liberals are far too spineless to even discuss the homophobia, xenophobia and misogyny of Islam, all while demonizing American Christians for having comparatively mild versions of those qualities.

We now know the religious and ideological affiliation of the gutless butchers of Boston, and one of them even had “Worldview: Islam” on their on-line profile. In the coming days and weeks as you observe America’s heart-broken Liberals endlessly wagging their fingers and lecturing everyone to remember that we shouldn’t judge entire groups based on the extremists in their ranks you can just laugh and think of how those same nauseating hypocrites gleefully and spitefully demonize and dehumanize everyone who disagrees with their politics, broadly painting them all as racists, gun-wielding rednecks and worse.

I will say again that I feel a certain degree of hostility for American Conservatives but for American Liberals I feel nothing but absolute contempt.

As surely as April follows March the bizarre masochists of America will blame themselves after every attack by Muslim fanatics. Never mind the fact that Muslims in America tend to live better than they do in countries run by their fellow Muslims. Even worse, in this case the sullen losers called the Tsarnaev brothers are getting shown more public compassion than their victims. And the demented cackling of their paranoid, shoplifting mother is on television even more often than campaign ads in an election year.

Imagine being a family member of one of the 3 dead and over 250 maimed and wounded from the Muslim Marathon Massacre and seeing how the increasingly demented creatures of the American media insist on celebrating the killers or maimers of your loved ones. And doing it over and over again simply because it fits into their masochistic “narrative” in which the country that took pathetic human beings like the Tsarnaev brothers in and even let their family have welfare benefits didn’t do enough to make them feel welcome and therefore supposedly DROVE them to the acts of violence they commited.

EVERY ONE OF THE VICTIMS OF THOSE TWO ANIMALS HAD ISSUES THEY WERE DEALING WITH, TOO! Because the Tsarnaevs’ victims were civilized they bore their individual pains like reasonable people do. None of their problems will ever be addressed because the repulsive American media insists on wallowing in this nauseating glorification of the petty complaints of two savage  ingrates who couldn’t deal with their own ignorance and insignificance and sought release by destroying the lives of people who did them no harm.

Regular readers of Balladeer’s Blog know that I trash both Liberals and Conservatives equally, but on this issue it is purely Liberals who are to blame. The next time you hear one of the spineless, hypocritical and hilariously pretentious asses of American Liberalism spewing forth their usual hatred for all American Christians, Republicans and Conservatives spit in their face and tell them not to say anything about their favorite hate objects that they wouldn’t say about those two animals, the Tsarnaev Brothers.

Surely since American Liberals ENDLESSLY pat themselves on the back for how “compassionate” they PRETEND to be they can spare some for people who simply vote differently from them. At least as much “compassion” as they show for the murderous products of a backward religion that hates music, women and gay people and riots over the drawing of pictures of its central figure.

FOR MORE ON AMERICAN LIBERALS AND CONSERVATIVES CLICK HERE: https://glitternight.com/category/liberals-and-conservatives/

FOR MORE ON WHY WE DESPISE AMERICAN LIBERALS AND CONSERVATIVES CLICK HERE:  https://glitternight.com/category/liberals-and-conservatives/