ANSWER: As long-time readers of Balladeer’s Blog can vouch for, I despised John McCain since long before Donald Trump was president. In fact, since I started Balladeer’s Blog back in 2010 I frequently made it clear that I considered McCain to be even lower than the clump of bacteria named George W Bush.

To give you an idea of how strongly I feel: I can promise you that no matter how much I despise George W Bush and Barack Obama I will NOT describe them in the same hostile way I describe John McCain. Especially after they’re dead. McCain doesn’t deserve any courtesy or consideration. Yes, that’s how low I consider McCain.

Searching under McCain’s name will bring up all the past posts here if you want all the details so I’ll try to keep it brief in this reply.

For starters, the media used to point out what trash McCain was, but now that he’s dead they just like using his corpse to hit Trump. By the way, all my criticisms of John McCain are the same ones used against him by the media when he ran for President in 2008. Since he feuded with Trump the media ignores what garbage McCain always was.

In my opinion John McCain embodied the stereotype of the racist, warmongering Republican rich pig. But I found him far more repulsive because he would often showboat with some token criticism of his colleagues to get positive pub from Democrat media outlets, then vote with the other Repubs anyway! It’s not “being a maverick” to act like “Hey, those other Republicans are all a bunch of racists and warmongers but not me” and then largely vote for all the policies that those “racists and warmongers” are voting for anyway.

HERE’S ANOTHER COLUMN POINTING OUT HOW REPUBLICAN JOHN “LET’S FIGHT WARS ALL OVER THE WORLD” MCCAIN WAS CALLOUS ABOUT PEOPLE DYING IN THE WARS STARTED BY HIM AND HIS PALS IN THE MILITARY-INDUSTRIAL COMPLEX – But people who claim to hate American Interventionism and Cowboy Diplomacy praised McCain simply because he took cheap shots at Trump. Click HERE 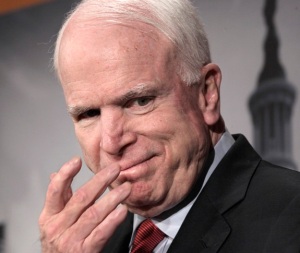 The reason President Trump once again mentioned what filth McCain was is because even more evidence has come out linking McCain to the pack of bizarre lies known as the Golden Showers Dossier. So, no matter what you think of the Orange One this is not a case of a sitting president gratuitously dumping on a dead Senator. He’s dumping on a Senator involved in publicizing such a low form of gossip-mongering that even the fascist J Edgar Hoover might have balked at doing it.

To quote from my most recent blog post featuring McCain:

His nauseating way of behaving like a prick then basically saying “You wouldn’t insult a man who has brain cancer, would ya” is so typical of this bought and paid for Republican worm.

John “Songbird” McCain was often linked to stories about how he collaborated with his North Vietnamese captors to the detriment of his fellow prisoners, some of whom were beaten to death. And refuses to okay the unsealing of his POW files despite frequent calls to do so. Hmmmm.

Plus this racist did more than anyone else to prevent America from having its first African-American president. And he’ll probably use his impending death to take petty shots at his political enemies since he lacks all integrity.

NEW NOTE (At the time) Hey, I was right! John “Songbird” McCain and his equally worthless daughter DID use his passing and his funeral for cheap shots at people, relying on people’s courtesy over the passing of an alleged human being to prevent them from striking back. The kind of courtesy that a subhuman like McCain would never show anyone else.

John McCain was filth and the world is a much better place for him no longer being in it. He was a well-known whore and given how he pathetically exploited his disease and his impending death there is no need for anyone to regret pointing out what an utterly useless man he was.

Good riddance, Songbird! EVERYONE KNOWS PEOPLE ONLY PRAISED YOU BECAUSE YOU HATED PRESIDENT TRUMP. YOUR CORPSE MADE A CONVENIENT POLITICAL CLUB TO BE USED BY PEOPLE AS LOW AS YOU ALWAYS WERE. Even the worms will gag on your worthless carcass … but I kid vermin like Songbird McCain.

*** Anyway, if you liked this subhuman piece of filth we will just have to agree to disagree about him. I don’t want to hear it. Period. And I don’t even say that about Bush or Obama.