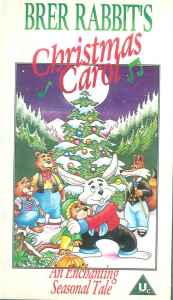 Br’er Rabbit’s Christmas Carol is my favorite out of all the versions which present A Christmas Carol as the framework of a Mission Impossible/ Leverage “con job” to make a greedy character change their ways. To nobody’s surprise, Br’er Fox is the Scrooge stand-in who requires a wakeup call.

All the characters live in a town in the American South, where a charity stage production of A Christmas Carol is being performed, with the proceeds going to benefit the terribly ill Timmy Mouse. No, not “Br’er Timmy” or anything like that, just Timmy Mouse as our Tiny Tim stand-in.

Br’er Fox has no time for silly fiction and is completely unfamiliar with the Dickens Christmas classic. That fact gives Br’er Rabbit the idea to work with his friends to instill some holiday spirit into Br’er Fox, who refuses to help Timmy Mouse and charges the other animals exorbitant prices for the firewood he sells. If they can’t afford to pay, they go cold.

This rendition of Br’er Fox is so greedy and villainous he even tricks his simple-minded aide Br’er Bear out of the deed to his home/ cave.

Br’er Rabbit and company choose Christmas Eve to use their thespian skills and some crude special effects to convince Br’er Fox that he is visited by the ghost of his late partner, Br’er Wolf. (Rather than 7 years, it’s only been 2 years since Br’er Wolf died.)

“Br’er Wolf” – voice provided by master impressionist Br’er Magpie – gives BR Fox the Marleyesque warning about the 3 ghostly visitors. BR Bear catches sight of some of the ersatz “haunting” fakery and loyally wants to save BR Fox, despite the swindling of his cave home by the latter.

BR Gator helpfully gives BR Bear some smoky “anti-ghost devices” and it briefly appears that the well-meaning bear may accidentally blow BR Rabbit’s plans with his interference. Luckily the anti-ghost tech is instead used to obscure the thespian con-job and BR Fox is returned to his bed before he can figure out that he’s being fooled.

The fox’s morning-after conversion is as joyous as always in these adaptations and BR Fox’s newfound generous spirit undoes all of his earlier villainy. Naturally he pledges to use his fortune to help Timmy Mouse survive, too. As a bonus he even throws a Christmas Party for the village, and BR Gator shows up dressed in a Santa Claus outfit to dispense gifts and endear himself to the animals who used to fear him.

Br’er Rabbit’s Christmas Carol is not a masterpiece but it has more of a holiday feel to it than some of the more recent big-budget versions of the story. People who hate Disney’s Song of the South will have no reason to dislike this cartoon. And at just 55 minutes it’s a reasonable length for younger viewers.

For trivia buffs it was made by the producers of Rocket Robin Hood cartoons from decades earlier!  ++