Halloween Month at Balladeer’s Blog continues with this look at the Grim Ghost, a Pre-Spawn horror figure from the VERY short-lived Atlas/ Seaboard Comics. FOR MANY MORE ATLAS/SEABOARD HEROES CLICK HERE

Origin: In 1740s America, Matthew Dunsinane was the masked Highway Robber known only as the Grim Ghost. He successfully preyed upon the Carriage Trade for years. In 1743 the Grim Ghost robbed Lord and Lady Braddock in their coach.

Lady Sarah Braddock, beautiful but evil, pretended to be interested in a tumble with the daring outlaw who had committed the robbery. Our red-blooded hero fell into her trap, was unmasked, tried and hanged.

In Hell, Satan informed the Grim Ghost that in the 20th Century he was facing a rebellious demon called Brimstone, who wanted to overthrow him and rule Hell in his place. That diabolical figure was endowing various evil-doers with powers to survive their ordained deaths, depriving Satan of their souls, thus weakening him in power and prestige. 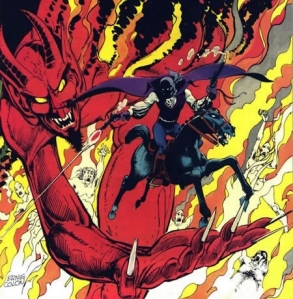 Satan offered to release the Grim Ghost from Hell periodically to subdue those renegade evil-doers and send them to Hell for damnation.

God would not interfere with Dunsinane’s mission since Brimstone was defying Fate. Satan endowed the Grim Ghost with powers of his own to battle Brimstone’s legions on Earth.

First Appearance: The Grim Ghost #1 (January, 1975). His final appearance came in July of that same year.

Powers: The Grim Ghost was given a flying, coal-black horse by Satan as well as ghostly powers of intangibility plus a brace of supernatural pistols. Those pistols fired shots that could burn and blast their way through solid objects plus dispatch Brimstone’s minions to their rightful place in Hell.

The Grim Ghost came long before Spawn and long before Marvel’s Ghost Rider was ret-conned into a similar reaper of evil souls. Coincidentally enough, one of the villains he fought in 1975 was called Hellblazer. The Grim Ghost was one of the few Atlas heroes revived briefly in 2010 and 2011.