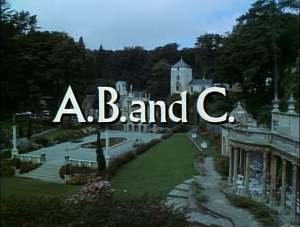 Episode Title: A. B. AND C. … In the ongoing debate about the exact numbering of the 17 episodes of The Prisoner I place this as the 10th episode.

As this episode begins we are still in the period of days with the same Number Two (Colin Gordon) as last time serving his time as a rotating executive of the Village.

The Story: A very nervous Number Two is in one of the Village’s concealed laboratories with Number 14, a blonde female scientist. (If you’ve seen the Simpsons episode parodying The Prisoner she’s the blonde lady to whom the bald Village Supervisor says “Tell me again why you thought a big balloon would stop people from escaping” and she replies “Shut up! THAT’S why!”) 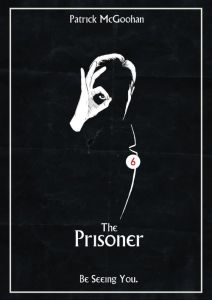 This Number Two is on very thin ice with the Board after the way he failed to stop the Prisoner and the traitorous Number Twelve from sabotaging two of the most crucial devices advancing the Villagekeepers’ conspiracy. Frequently chugging milk for his ulcer, he anxiously hopes to recover some favor and credibility by at last maneuvering Number Six into admitting why he resigned from British Intelligence.

(For newbies to The Prisoner I’ll point out that if the Villagekeepers succeed at making Number Six admit why he resigned it will symbolize his surrender to them and recognition of their authority over him, like agreeing that “2+2=5” in Orwell’s 1984 symbolized surrender to The Powers That Be.)

Dialogue makes it clear that Number Two is forcing Number Fourteen to proceed more quickly than she would like onto a human subject for her combined drug & electronic method of monitoring dreams of sleeping primates. As always on The Prisoner these reminders that humans are basically animals, too, serve like Rousseau’s “Noble Savage” metaphor for humanity.

Anxious to get out of the doghouse with the Board, Number Two throws caution to the wind and orders her to proceed, using our main character as the very first human subject for her technique. Yes, the Villagekeepers are now moving on to invading people’s DREAMS, in an even greater violation than techno-fascist Mark Zuckerberg and his ilk are capable of.

Viewers can’t help but be revolted at the thought of the government and other forces of conformity not even letting us escape their reach “behind the wall of sleep” but the Villagekeepers themselves – as free of ethics as ever – aren’t troubled by this in the least.

Number Two has complemented Number Fourteen’s science with intense research into the Prisoner’s life & career and the likely path he would have pursued if the Villagekeepers had not abducted him right after his shocking resignation. He has determined that McGoohan would have flown to Paris for a party at Madame Engadine’s, where various governmental, military and intelligence figures often mingled with Paris’ Beautiful People.

Number Two is convinced our protagonist would have confessed his reasons for resigning to one of three people he has codenamed A, B and C. The unconscious Number Six is wheeled in on a table and Number Fourteen begins her work, using chemical injections and electronic devices to monitor and project the Prisoner’s dreams onto a wall-sized view-screen for her and Number Two.

The female scientist programs into our sleeping hero a dream in which he was never abducted to the Village and his life continued as it would have otherwise. Think of it like how we all have dreams in which we adjust to scenarios that are fundamentally different than real life. Hell, we can even interact with people who are dead in real life but we are unfazed by this within the dream.

Back to the story, this first dream progresses as the Prisoner arrives at Madame Engadine’s where some attention is paid to his recent, unexpected resignation. The man codenamed “A” by Number Two attempts to recruit our hero for the Soviets and is rebuffed. McGoohan emerges from the resulting fight with his tux barely ruffled, reminding us that in real life Patrick turned down the opportunity to be the first James Bond on the big screen. (He recommended his friend Sean Connery.)

Number Two is convinced by this scenario that the Prisoner’s resignation was not motivated by a desire to work for the other side in the Cold War. He wants to continue but Number Fourteen refuses, saying that a 24 hour break from the drugs and electronics is needed to prevent the subject from dying before info can be obtained from them.

Waking up in the morning Number Six eventually notices an injection mark on his arm and realizes that the Villagekeepers must have used him in one of their bizarre, top secret experiments overnight. He and the nervous Number Two verbally spar over it but the latter claims Number Six is mistaken. Our hero recognizes Number Fourteen from his dreams of the night before when he caught a glimpse of her in the lab while he was still semi-conscious.

That night the Prisoner is sedated and once again wheeled into the lab. This time Number Fourteen and Number Two manipulate his dreams to place him back at Madame Engadine’s party. The beautiful woman codenamed “B” interacts with Number Six this time. He resists all inquiries about his resignation and the two move on to just dancing and flirting. 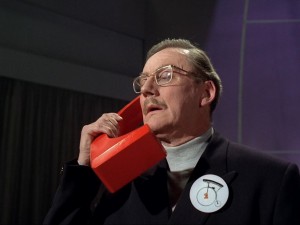 Number Two – who keeps getting impatient, nagging phone calls from the Board over the Village’s wireless phones – frantically implores Number Fourteen to do something to speed up the process. She grabs a microphone and proves able to start speaking for “B” within the dream.

Number Fourteen pushes for info a little too hard, making McGoohan suspicious even in his own dream. Detecting a lack of authentic repartee and conversation all of a sudden he peppers the dream version of “B” with personal questions. Number Fourteen is not able to answer them so our hero abandons her, ending this second night’s experiment.

During the day the Prisoner discovers a second injection mark on his arm – more evidence that his body has been experimented on – and secretly follows Number Fourteen. His experience with the Village’s visual surveillance system allows him to penetrate through to Number Fourteen’s lab.

When she leaves he investigates the equipment and pieces together what has been going on. He waters down the drugs intended for that night’s experiment, hoping to throw a wrench into the proceedings.

That night the sleeping Number Six is again wheeled in, injected and wired up. Number Fourteen warns the frantic Number Two that three times is the max for using the technique on a subject, so tonight is IT, one way or another. Our hero’s watering down of the drugs manifests in a very strange version of Madame Engadine’s party, one in which everyone acts creepy and sinister. It’s like a party version of the backward-talking scenes on Twin Peaks.

Number Fourteen is puzzled but attributes the strangeness to our hero being the first human test subject for her technique, resolving to compensate for such side effects on future human subjects.

In this dream McGoohan is able to control everything and he suckers Number Two and Number Fourteen along before revealing that he is on to them. He triumphantly goes on to thwart their plan to use his dreams to pry out of him his reason for resigning, even taunting them from within his dream.

Number Two, who was warned by the Board that this was his last chance to make good, is horrified when the phone once again buzzes, signaling his presumably fatal punishment.

COMMENT: Back to back victories for the Prisoner over the sinister Villagekeepers. I promised you that more hopeful episodes were to come after the despairing ending to Many Happy Returns!

In this episode the edge in the ongoing war of nerves continues to switch from the Villagekeepers over to our protagonist. His continued defiance is wearing on his captors, as evidenced when this installment’s Number Two, while watching the viewscreen showing the Prisoner as usual pacing around the Village, shouts at the screen “Walking …. He’s ALWAYS walking … DOESN’T HE EVER GET TIRED!?” +++