THE PRISONER: THE GENERAL

Episode Title: THE GENERAL … In the ongoing debate about the exact numbering of the 17 episodes of The Prisoner I place this as the 9th episode.

This time around viewers learn the truth about the mysterious “General” that the Villagekeepers referred to back in The Schizoid Man.

As another sign of how The Prisoner is even more relevant here in the 21st Century this episode deals with totalitarian distortion of the educational system, “official” history and access to information via computers/ the internet. Today we see techno-fascists like Mark Zuckerberg plus his fellow Democrats at Google, Wikipedia, Twitter and other social media allying themselves with just one political party.

Centralizing and monopolizing the dissemination of information for ugly partisan purposes and in order to police the free exchange of ideas has become nightmarishly easy for those so inclined. Freedom of expression is becoming limited to those who mindlessly agree with the Democrat Party’s dogma. All other opinions are increasingly banned as “hatred” or “violations of community standards.”

While drinking coffee at one of the Village’s establishments the Prisoner and his fellow Villagers hear a loudspeaker announcement instructing them all to return to their homes for the latest televised history instructions from an unnamed Professor. Number Twelve (John Castle), one of the Villagekeepers, encourages Number Six not to miss the upcoming lesson.

The Prisoner is naturally wary of Number Twelve’s attempt at friendly conversation. Number Twelve sardonically notes that there may be a slight delay in today’s lesson because the black helicopters overhead are pursuing the Professor, obviously another captive of the sinister Villagekeepers.

Out of curiousity our main character follows the copters to the beach where he sees the elderly Professor being cornered and recaptured. The frightened man is hustled off to the Village’s television studio to get ready for the broadcast.

The Prisoner notices that during his flight along the beach the Professor partially buried a tape recorder in the sand. Our hero starts to play the message and hears the Professor’s voice about to issue a warning regarding the General. McGoohan reburies the device in the sand – thoroughly this time – intent on retrieving it later.

Soon a few Village goons show up to escort Number Six off the beach and back to his residence so he can catch the latest history lesson. The Professor’s wife is already on the air spouting pleasantries, stalling for time while the Villagekeepers get her now-recaptured husband ready for the broadcast.

Once the Professor goes on the air the Prisoner watches what seem like just a few almost worthless minutes of an alleged “lesson” before the day’s broadcast is over. This episode’s Number Two (the rotating series of executives who manage the Village) drops by to ask our hero what he thinks of the Professor’s methods. 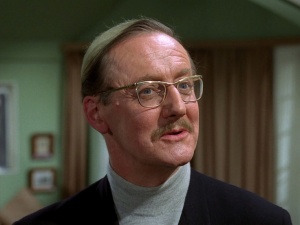 Number Six sneers at the apparently pointless nature of the “history lessons” only to be quizzed by Number Two (Colin Gordon). To our main character’s astonishment he now has an encyclopedic knowledge regarding “Europe Since Napoleon,” the subject of the day’s history lesson.

Number Two boasts to the Prisoner that the Professor is another of their captive scientists who have been refusing to tell the Villagekeepers how his invention works. Once they abducted his wife to the Village he began cooperating, but so far just to the point where he uses his invention to subliminally broadcast genuine historical information into the minds of the Villagers.

Soon, Number Two assumes, they will break the Professor completely, like they have with so many like him in the past and like they intend to eventually break our hero as well. When the Professor is broken and tells the Villagekeepers how his device works they will begin using it to subliminally substitute THEIR version of “history” to the world at large, not genuine history.

This will make the villains’ plans to impose a Global “Village” infinitely easier. They will have an absolute monopoly on what people know and consider to be authentic history, news and all other information. All of it can be changed as needed, too, with revisions broadcast subliminally into people’s minds the same way the previous versions were.

Number Two gloats that between this and the guidance of the General there will soon be nothing that can stop the Villagekeepers. This seems to be another attempt to persuade the Prisoner that resistance is futile and he’d be better off cooperating and throwing in with the conspirators while he still can.

That night Number Six slips out of his residence and returns to the beach to covertly recover the recorder with the Professor’s warning so he can listen to the whole thing. He discovers it missing but is then surprised by the presence of Number Twelve.

However, now that Number Twelve has seen the scale of the Villagekeepers’ conspiracy and their tyrannical plans for the world he is having second thoughts. He wants the Prisoner to help him secretly undermine the General and sabotage the Professor’s “Speed Learn” invention. As a show of good faith he gives our hero the tape recorder he was searching for.

Back in his residence Number Six listens to the message on the recorder and hears the Professor rail against the way his Speed Learning process is being perverted and further states that “If you wish to be free there is only one way. Destroy the General.”

Our protagonist decides to cooperate with Number Twelve, who in a SPOILER I will mention really IS working against the Villagekeepers, it’s not one of their Head Games. Throughout the next day Number Six and Number Twelve covertly set up their plans. 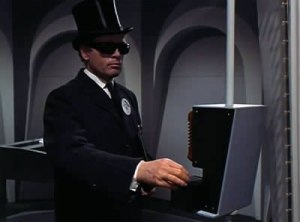 By the time that this day’s “History Lesson” is going to be broadcast Number Twelve has arranged for the Prisoner to slip into the television studio where a meeting of the top-hatted and sunglass-wearing Board Members is taking place. Computerized tokens bearing the Village’s ubiquitous penny-farthing bicycle logo enable McGoohan to penetrate to the broadcast room.

He and Number Twelve have planned for the Prisoner to replace the day’s subliminal Speed Learn Lesson with the Professor’s warning and invocation to rise up and destroy the General. They hope this will at least enable subconscious resistance to the Speed Learn process and at most hopefully lead to all-out rebellion in the Village.

Unfortunately, Number Two catches on and has Village goons prevent our hero from substituting the subversive message for the real one. After another of the show’s vicious fight scenes the Prisoner is subdued and suffers a major arm injury.

Number Six is taken for interrogation by Number Two and Number Twelve, whose secret alliance with the Prisoner is still unsuspected by Number Two. Number Twelve pretends to be obeying Number Two’s orders to try to squeeze out of McGoohan the names of the co-conspirator(s) who helped him crash the Board meeting AND infiltrate the broadcast facility.

Eventually Number Two is maneuvered into using the much-vaunted General to figure out who helped the Prisoner. Number Two gloatingly reveals to Number Six and Number Twelve that the General is a computer network which has access to all information around the world and therefore “knows all.” It is another invention of the Professor’s being perverted by the Villagekeepers.

Number Two orders the Professor to use the General to find out who helped McGoohan. One thing leads to another and in the end the Prisoner successfully sabotages the General but the resultant destruction also kills the Professor AND Number Twelve, who died trying to save the Prof’s life.

For once the Villagekeepers have been dealt a major setback because with the General destroyed and the Professor dead before he could be broken enough to reveal how his technology worked, the villains have lost both Speed Learn AND the General.

COMMENT: I have no idea why McGoohan and his creative team on The Prisoner decided on the name “The General” for the omniscient computer system. Looking at this episode with 21st Century eyes, though, the military rank serving as the computer’s name always reminds me that the Internet, the kind of all-intrusive computer system that the fictional General anticipated, began as a military and governmental exploitation of such potentially invasive technology.

The mammoth size of the General can’t help but make us laugh these days, since such devices are often much, much smaller now.

To me the biggest story-telling weakness of this episode is the Prisoner’s Captain Kirk-style destruction of the computer by asking it an unanswerable question. I hardly think a computer would explode instead of just replying “Insufficient data” or “Question improperly formatted.”

If they absolutely had to have the General be destroyed in that manner instead of through physical sabotage the LEAST they could have done is make the “unanswerable” question be “Why did Number Six resign?” That would have at least been a nice thematic tie-in with the show’s premise. +++

27 responses to “THE PRISONER: THE GENERAL”