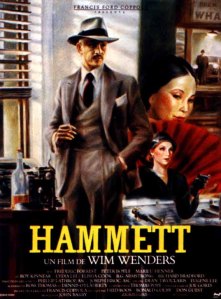 HAMMETT (1982) – Directed by Wim Wenders and produced by Francis Ford Coppola’s Zoetrope Studios, Hammett is a criminally neglected valentine to Hard-Boiled Detective Stories and Film Noir. The flick is based on the novel by Joe Gores.

The stories about the behind the scenes chaos and conflicts surrounding the production of this movie are legion. Pre-production work began in 1975 and by the time it was released in 1982 multiple cast and story changes had taken place and Coppola himself re-shot more than a third of the film.

In the way that Time After Time presented a whimsical “what if” adventure featuring H.G. Wells having a real time machine, Hammett serves up iconic detective novelist Dashiell Hammett getting caught up in solving a real-life mystery.

The timing is excellent, with the story being set in the late 1920s, after Hammett was no longer working for the Pinkerton Detective Agency but before he became a successful author. The tale begins with our hero – played by Frederic Forrest – typing out one of his penny-a-word Pulp stories for Black Mask Magazine, which was to detective fiction what Weird Tales was to horror and sci-fi. 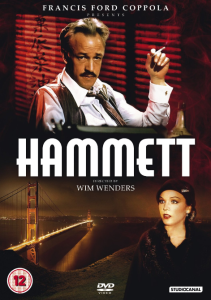 Booze and coughing fits figure prominently in the movie, as you would expect given a protagonist who was an alcoholic with tuberculosis. For the sake of convenience the story that Hammett just finished before blacking out was one featuring his character the Continental Op (as in an operative for the fictional Continental Detective Agency).

Hammett awakens to find his most recent work being read by Jimmy Ryan (Peter Boyle), his old mentor from his Pinkerton days. Ryan jokes with “Sam” (Samuel Dashiell Hammett was his full name if you’re new to all things Hammett) that the “man with no name” in the story seems to be based on him (Ryan) and the way he operates.

Eventually Jimmy gets to the point: he saved Hammett’s life when our hero was new at detective work, and Ryan is finally calling in the debt that Sam owes him for that. The former colleague thus lures Hammett back into detective work for one last case.

It should go without saying that this case winds up being much deeper and darker than Ryan initially let on and Sam is forced to swiftly reorient himself to the ways of danger, duplicity and murder. The mystery leads from white slavery and pornography in San Francisco’s Chinatown (yes, there were pornographic films even in the Silent Movie Era) to social circles in which deadly criminals mingle with supposedly respectable tycoons and power brokers.

Like the earlier Jack Nicholson film Chinatown, Hammett would have benefited from black & white cinematography to show 100% commitment to the Film Noir style. As it is, though, the dialogue and the action is staged exactly like it looked in many hard-boiled detective movies of the 1940s, making it all quaintly anachronistic and often awkward-looking.

That seems to have really annoyed many reviewers in the 1980s but here in 2018 we’re more accustomed to this slavish pastiche of cinematic styles, even though it’s mostly done for a faux-70s or 80s feel. (Grindhouse, Beyond the Black Rainbow and others) I’m not even bothered by the obvious film sets, since to me it’s all part of getting immersed in the aesthetic of the original movies.

Supposedly Coppola’s backers balked at going all the way and making the movie black & white, which is a shame. Who knows what else was lost in the reshoots demanded by the money men.

Hammett is not nearly as great as the aforementioned Chinatown, but it’s not really trying to be, just as Time After Time wasn’t trying to be a serious sci-fi flick. It’s all a lot of fun, especially with figures like Elisha Cook, Sylvia Sidney and Samuel Fuller showing up in the supporting cast.

Sultry Lydia Lei plays Crystal Ting, the Chinese beauty whose ruthless determination to rise from prostitution drives the storyline. Seems she’s had some very prominent clients and if she starts telling tales or sharing photos it might affect lives the way Mary Astor’s famed Lovers Diary did in real life.

Roy Kinnear shows up as a Sidney Greenstreet stand-in, Marilu Henner is a sexy dame in Hammett’s life and R.G. Armstrong is the requisite Dick with a badge who hassles our hero. Plus Jack Nance and David Patrick Kelly appear, for my fellow Twin Peaks geeks. And Fox Harris from Dr Caligari and Repo Man sneaks in as the News Vendor.

Hammett‘s obscurity seems to me to be the result of people having expectations that were WAY too high. Viewers hoping for another Chinatown will be far from satisfied but if you go in prepared for a modest, quirkily enjoyable bit of business filled with Easter Eggs for trivia buffs then this movie just might steal your heart the way it did mine. +++