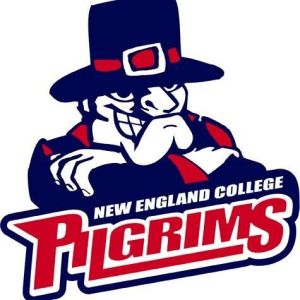 Thanksgiving Week continues! I’m sure we all remember how the Pilgrims of the 1600s fled England to escape persecution for their horribly malformed faces (see left).

William Bradford sought out Professor Charles Xavier and together the two men parted the waters of the Atlantic Ocean so that Puritan Mutants could make their Exodus and walk all the way to the New World.

Upon arrival, Xavier decided to lie and say that he and his fellow Pilgrims had reached Plymouth Rock. This was not true, of course, but even then Charles Xavier was a pathological liar.

At any rate here’s a look at the logos of the New England College Pilgrims from Henniker, New Hampshire.

The Pilgrims compete in Division Three of the NCAA as part of the North Atlantic Conference.

For The 20 Coolest College Sports Teams You May Never Have Heard Of click here: https://glitternight.com/2010/06/21/the-20-coolest-named-college-sports-teams-you-may-have-never-heard-of-naia-edition/

For the 20 Coolest-Named College Sports Teams In the USCAA and NCCAA click here  – https://glitternight.com/2010/11/24/the-20-coolest-named-uscaa-and-nccaa-sports-teams/