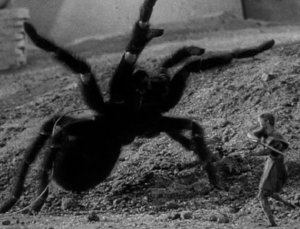 THE ULTIMATE INHERITORS (1914) – Written by Berg Bellair. This is a very entertaining work of vintage or “ancient” science fiction and is especially noteworthy for the way it anticipates the many “big bug” movies of the 1950s and later.

In the California desert, where the Golden State borders Arizona and Mexico, a pair of investment miners named Big Ike Pemberton and Joe Kinzie save an older man from dying of exposure. The man turns out to be Doctor Bauer, a scientist who was investigating uranium deposits in the vicinity.

Dr Bauer is the sole survivor of an expedition whose exploratory blasting work accidentally freed dozens of giant, horse-sized spiders from subterranean caverns. Bauer has photographic proof of this claim and theorizes that radiation from the uranium deposits mutated the spiders into their current enormous state.

When the mutated creatures are spotted moving en masse toward the nearby city, Big Ike, Joe and Doc Bauer nobly round up a small force of armed men, then head into the desert intent on exterminating the giant arachnids. It turns out the spiders have also been made much more intelligent than humans and eventually the army of spiders outmaneuvers Big Ike and company, who are forced to retreat on top of a butte.

The humans use up all their dynamite keeping the huge spiders at bay and are nearly out of ammunition. Just when things look hopeless a biplane flies overhead, dropping germs which infect and kill the eight-legged titans once and for all.

The title of the story comes from an exchange of dialogue when our protagonists were surrounded on the butte and facing probable doom. Dr Bauer speculated that with their size AND intelligence the giant spiders might well be the ultimate inheritors of the Earth.

This is a creepily fun read full of story elements that would become tropes of Creature Features of the future. The germ warfare resolution to the conflict is reasonable enough to make the ending of the tale satisfactory. ++

One response to “THE ULTIMATE INHERITORS (1914): VINTAGE SCIENCE FICTION”