A HERO AND HEROINE OF COLOR

Balladeer’s Blog often covers the jumbling and shuffling going on in American politics right now. Bernie Sanders and Donald Trump’s candidacies last year made it the first campaign season in a very long time in which the REAL issues that the VOTERS care about got discussed. Here are two more courageous people declaring their independence from traditional DemCorp and RepubCorp politics:

TIM SCOTT – Senator Scott (R) from SC took to the Senate floor to discuss the way that freethinking African-Americans like himself get treated by DemoKKKrats for not obeying them like Barack Obama always did:

Senator Scott also embarrassed the Senate DemoKKKrats by pointing out that, despite DemCorp’s constant talk of “diversity” that it’s actually the Senate Republicans that have diverse staffs, not the Democrats. Scott has a black chief of staff, which is a rarity among Senate Democrats. He also mentioned it in his remarks.

And I will once again point out that the Democrats are the party of slavery, the Ku Klux Klan, lynching, the Dred Scott Decision, and Jim Crow laws yet Democrats feel that their political party can simply say “Well, that was long ago. We’re better people now. But THE REST OF YOU AMERICANS bear collective guilt about slavery in perpetuity.”

No, DemoKKKrats, if your party can put those things behind you so can the rest of us. After all, your political party is THE ONE REMAINING INSTITUTION most associated with those racial outrages. Quit trying to lecture the rest of us about what YOUR POLITICAL PARTY was responsible for.

You want to REALLY “bury the racist past?” THEN CHANGE THE NAME AND SYMBOL OF YOUR POLITICAL PARTY! 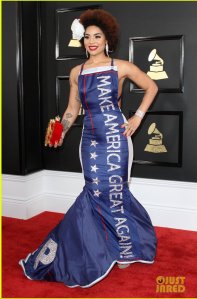 JOY VILLA – This incredibly courageous lady conducted what amounts to a covert infiltration of hostile territory at the Grammy Awards recently.

While other celebrities pretended to be “edgy” by pandering to the crowd with anti-Trump diatribes that were short on facts but long on hysteria Ms Villa defiantly demonstrated her adamantine individuality.

She slowly revealed her Make America Great Again (MAGA) dress to the shock of the Left-Wing Archie Bunkers at the Grammies.

I’m not fond of “rah-rah” slogans like that but I have to admit that it was great the way the left frothed at the mouth and began besieging Joy with their usual hatred for stepping outside of Groupthink.