ELVIS PRESLEY: ROCK’N’ROLL VS THE REDCOATS

Elvis IS General Andrew Jackson at the Battle of New Orleans

January 8th of each year always represents the general rift that separates American pop culture from alleged “high culture”. On the one hand it’s Elvis Presley’s birthday. On the other hand it’s also the anniversary of the Battle of New Orleans, in which General (and future President) Andrew Jackson teamed up with French pirate Jean Lafitte to hand the British their worst defeat in the War of 1812.

It’s not tough to guess which event gets more attention year in and year out, but cult director Eddie Wozniak took a break from the film world to write, produce and direct this musical comedy.

Rock’N’Roll vs the Redcoats is Wozniak’s hilarious but educational fusion of Elvis’ birthday with the martial anniversary. The musical comedy depicts the events of 1815 as they might have been depicted in an Elvis Presley movie with an actual Elvis impersonator in the lead role. So basically the star of Rock’N’Roll vs the Redcoats is a man playing Elvis Presley playing General Andrew Jackson.

If you enjoyed the musicals 1776 and Bye, Bye, Birdie you’ll no doubt love the way Wozniak works in historical trivia without deviating from the overall “Elvis Movie Feel” of the piece.

Many of the songs play into this perfectly – Hermitage Howlin’ deals with Jackson’s Tennessee background, a characteristic he shared with the Man from Memphis; Rachel, Will You Marry Me Again covers the way Andrew Jackson and his beloved wife Rachel were forced to marry a second time when it was learned that she had unknowingly committed bigamy and My Tallahassee tunefully recounts the way General Jackson seized Tallahasee, FL in TWO separate wars.

Them Brits Done Me Wrong is the real showstopper, featuring as it does a recap of everything the teenaged Andrew Jackson had suffered fighting for the Rebels in the Revolutionary War decades earlier. Young Andy gained a facial scar from a British officer’s sword, he and his brothers were held as POW’s in the Redcoats’ hellish prison-ships where his brothers died from disease as did his mother, who perished working the prison-ships as a nurse.

The POW portion of this rousing rockabilly number carries with it just enough of a hint of Jailhouse Rock to make even the most hard-hearted audience member smile. 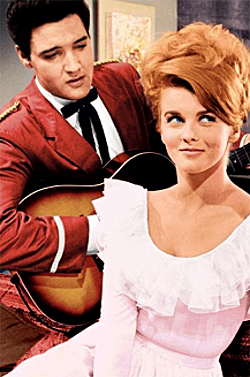 Together again for the first time!

Wozniak outdid himself when he cast Jean Lafitte, filling the role with a drag queen specializing in Ann-Margret impersonations. If Elvis as Andrew Jackson seems wonderfully absurd Ann-Margret in a role previously assayed by Yul Brynner lifts this novelty musical to the next level in terms of cultural kitsch. Ann/Jean performs a duet with Elvis/Jackson as the two join voices for J’Aime New Orleans (“I Love New Orleans”), an uproarious parody of Viva Las Vegas.

Wozniak may want to start working with someone else producing him from now on, to keep his ego in check. He often seems a little too impressed with his own cleverness as the show meanders its way to the climactic Battle of New Orleans.

The British Invasion number performed Beatles-style by the attacking Redcoats is the only true high point of the final thirty minutes of the musical. Pakenham’s Neck ( a pastiche of the Elvis song Rubberneckin‘) feels forced in just to show off Wozniak’s familiarity with the historical oddity of British General Packenham’s freakish off-setting neck injuries.

Overall, however, Rock’N’Roll vs the Redcoats should be a moderate hit, maybe even earning a film adaptation at some point. Then Wozniak will have added a new “holiday themed” movie to the calendar, like the ones he drones on and on about so frequently.

6 responses to “ELVIS PRESLEY: ROCK’N’ROLL VS THE REDCOATS”