The weak, inept and crooked little man named Barack Obama has been hard at work struggling to rewrite the history of his eight disastrous years in office by outrightly lying. People like Paul Krugman, who specializes in Barack Obama fan fiction, will no doubt repeat all of Obama’s tall tales as if they’re the truth.

Anyway, in the spirit of Barack Obama’s deranged claims here are a few other items that worst of all presidents will probably try to take credit for.

** Having his presidency foretold by Nostradamus when he wrote “And a self-infatuated fool/ With ears as large as dinner plates/ Will undo decades of racial progress/ As he stubbornly clings like dogshit to the bottom of history’s shoes.”

** Composing a song called Hail to the THIEF to be played whenever Hillary Clinton entered the room.

** Reducing his own political party – the Democrats – to isolated bands of pompous snobs and professional hatemongers scattered around the country. (Okay, that one’s the truth.)

** Coining the expression “Ya workin’ hard or hardly workin’?”

** Writing Gone With The Wind, The Godfather and Space Raptor Butt Invasion.

** Being not only the 1st African-American President but the 3rd and 4th as well. (Hey, it makes as much sense as anything else Little Barry is claiming.)

** Being the enigmatic man referred to in the Carly Simon song You’re So Vain. 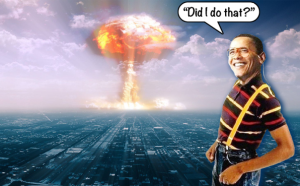 ** Providing the voice of Maggie Simpson.

** Forcing through the Louisiana Purchase.

** Making even the supreme ass George W Bush look competent. (Well, okay, I’ll give him that one, too.)

FOR MORE ON LIBERALS AND CONSERVATIVES CLICK HERE:     https://glitternight.com/category/liberals-and-conservatives/