AEGIR – The god of the sea who brewed the ale that he would share with the other Teutono-Norse deities when they would get together at his hall on the island of Hlesey. Many poetic references are made to Aegir “swallowing” sea-goers and there are historical references to Viking and Saxon pirates sacrificing a tenth of their prisoners to Aegir by casting them into the sea.

The river Eider was called “Aegir’s Door” by the Vikings. Aegir was depicted wielding a spear and with his wife, the goddess Ran, had nine daughters, the goddesses of the waves. Their names were: Bara (sometimes Drofn), Blodughadda, Bylgja, Dufa, Hefring, Himinglaeva, Hronn, Kolga and Ud (or Unn). Odin slept with each of those daughters who then communally gave birth to Heimdall as the god Rig. 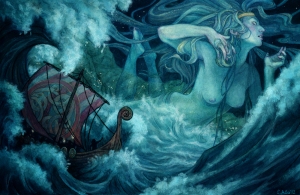 RAN – Aegir’s wife and a sea goddess who was depicted luring sailors at sea into diving into the depths with her mesmerizing beauty, similar to Lorelei myths. Ran had a net with which she would collect the victims of shipwrecks and storms and take them to her home.

When a person died at sea, it was said that if their ghost appeared at their own funeral feasts  it meant Ran had made them at home in her subaquatic realm. It was considered wise to have gold on one’s person when traveling at sea, to avoid going empty-handed into Ran’s hall if misfortune struck. No surviving myth specifies the fate of these drowned souls on the day of Ragnarok.