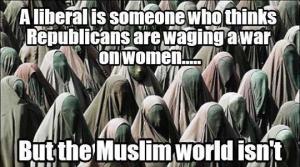 American Liberals (And I used to consider myself one until they adopted this bizarre attitude of Islam: Right or Wrong!) are the ultimate cowards. They try to take credit for the courage shown by people long ago while gutlessly slinking away from the dangerous issues of the here and now.

No, preening Liberal asses, it does not make you brave to CLAIM you would have stood up to the Nazis or the forces in favor of slavery or the blacklisters of the past. The ridiculous pretence that you worms would have had the backbone to oppose those oppressive forces is belied by your cowardly hypocrisy when it comes to similar forces wreaking havoc in the present day.

You’re too terrified to oppose Muslim fascists who have kept slavery going, who are homophobic and are otherwise intolerant. You’re too cowardly to even criticize Islam’s “Peculiar Institution” of treating women like they’re dirt. You’re far too timid to stand up to the left-wing blacklisters of today no matter how many careers they destroy or how many lives they ruin.

Instead you ignore and frustrate those Muslims who want to reform their faith and bring it into the 21st Century. You refuse to even let them speak on college campuses when you can stop them. And you aid and abet left-wing blacklisters ESPECIALLY among the secular clergy who pretend to be “educators” here in the 21st Century.

SO REMEMBER: SIMPLY CALLING YOURSELVES “LIBERALS” DOES NOT MEAN YOU GET TO INSINUATE YOURSELF INTO THE COURAGEOUS ACTIONS OF PEOPLE FROM DECADES PAST. THOSE PEOPLE WOULD MORE THAN LIKELY FIND YOU HYPOCRITICAL COWARDS EVERY BIT AS DIGUSTING AS THE REST OF US DO.

14 responses to “THE ULTIMATE COWARDS”