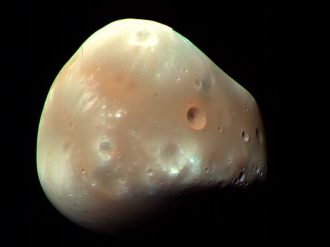 Balladeer’s Blog continues its examination of Garrett P Serviss’ odd sequel to Fighters From Mars, his blatant imitation of War of the Worlds.

The 20 spaceships in the detachment commanded by Garrett Serviss and Colonel Alonzo Jefferson Smith rejoined the main fleet commanded by Thomas Edison. That main fleet was continuing its bombardment of the Martian forts and cities below with their disintegrator guns while trying to remain just outside of the range of the Martians’ lightning cannons. (I know “cannon” can also be plural but many people don’t so to avoid confusion I use “cannons” instead)

Serviss and Smith informed Edison about the success of their raid to obtain supplies for the entire fleet and then revealed the other find from their raid: the captive Earth woman whom the Martians had been using as a slave.

With the dire supply problem solved Edison decided to have the Terran fleet withdraw to the Martian moon of Deimos. The remaining 60-plus Earth ships landed on the side of that moon that was always faced away from the Red Planet. Patrols in camouflaged space suits were posted on the far horizon to keep a watch on Mars with telescopes to prevent any surprise attacks.

Edison’s plan was to remain thus hidden for at least two weeks while repairing any damages to the remaining vessels and planning a new strategy against the Martians. With any luck the denizens of the Red Planet would think the Terrans had retreated back to their home planet.

This down time was also spent having the fleet’s linguists attempt to communicate with the beautiul Earth woman freed by Serviss and Colonel Smith. The Martian PO taken during the battle at the golden asteroid had perished in one of the Earth ships that were destroyed in the attack at the Lake of the Sun so it was hoped the Earth woman could provide intelligence that would help the fleet.

Eventually progress as made, mostly due to the efforts of a German linguist from Heidelberg. It turned out the woman was named Aina (uh-eee-nuh) and she spoke an obscure ancient language of Earth. Her ancestors lived in the Valley of Cashmere in the distant past.

Roughly 9,000 years earlier countless Martian ships had landed on Earth and enslaved all her people. The Martians eventually moved on with their new slaves, landing in ancient Egypt. While there they made their slaves construct the pyramids and the Sphinx, whose face was modeled to resemble the leader of the Martian expedition to Earth.

After several years a plague broke out among the Martians, killing so many so swiftly that the 15 ft tall people of the Red Planet evacuated the Earth, taking all of Aina’s ancestors with them as slaves. That plague was presumably caused by the same bacteria which had killed off the Martians who had attacked the Earth months ago.

Down through the millenia that followed Aina’s people were kept on Mars, serving their conquerors in various ways, but through oral tradition preserving their own language and remote history.

When the Earth fleet had appeared in the sky over Mars to do battle with the Martians all of Aina’s people rejoiced. In response their captors made the terrible decision to annihilate all of their Earth slaves. All around the planet the hundreds of thousands of remaining Terrans from the Valley of Cashmere were slaughtered.

Aina herself was kept secret by her owner because of her musical skill and that is how she came to be performing for the Martian soldiers when Serviss and Colonel Smith arrived at the supply house.

By now Edison’s 2 weeks had stretched out to 3, but during that time the Martians had gone from having some of their airships patrolling just outside their chemical cloud cover to dispersing the cloud cover completely.

Obviously the Martians were convinced the Terran forces had fled. The commanders of the Earth fleet now plotted to inflict a decisive blow against the Red Planet. With Aina’s knowledge of the Martians’ language and ways, an end to the war was within sight. +++

UP NEXT: THE CONCLUSION OF EDISON’S CONQUEST OF MARS.

I WILL EXAMINE THE FINAL PART SOON.

FOR WASHINGTON IRVING’S 1809 depiction of an invasion from the moon click here: https://glitternight.com/2014/05/05/ancient-science-fiction-the-men-of-the-moon-1809-by-washington-irving/