ISLAM’S HOMOPHOBIA AND MISOGYNY: SOME FAQ’s 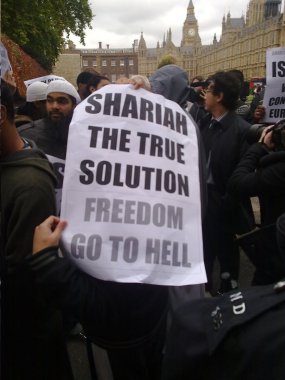 Regular readers of Balladeer’s Blog know I’m a non-believer in all of the world’s religions. Most religious practitioners are able to deal with that though some show varying degrees of anger. There is only ONE religion here in the 21st Century that retains the superstitious savagery of the past and that is Islam. I could literally fill this blog every single day with nothing but article after article about Muslim atrocities but the horror of it all would be overwhelming.

Q: Are you one of those cowardly non-believers who will only criticize Christianity while giving Islam a free pass?

A: No, I criticize all religions and regard them all as fascinating mythology that should never be taken literally. Muslims are the only ones who violently insist their religion should be above that sort of criticism.

A: No, it’s only rational to subject all of the world’s religions to criticism and satirical irreverence. Other religions, especially Christianity, have to put up with it on a daily basis and their practitioners may complain but they remain civilized and don’t kill anybody or  burn down buildings or launch riots over it. Islam and Islam alone reacts in this barbaric and unacceptable way which does nothing but make people despise and distrust Islam even more than they already do.

Q: Did you start to feel this way after the September 11th attacks?

A: No, I felt this way about all religions including Islam years before September 11th, 2001. Back then I was still considered a Liberal and even Liberals would criticize Islam along with other faiths. After the 9-11 attacks American Liberals proved what cowardly hypocrites they were by dropping to their bellies and crawling for Islam while bashing the hell out of Christianity. I’ll never be a Conservative, but I don’t ever want anyone to think that I’m a Liberal given what they’ve turned into.

Q: Is there anything that would make American Liberals condemn Islam’s homophobia and misogyny the same way they condemn it in other religions?

A: No. American Liberals are incapable of that kind of courage and integrity. They’re only good at taking stands on issues that are now safe, like condemning blatant racism and sexism, and pretending that those are still brave stands to take. Besides, you could argue that if they were really opposed to racism and sexism they would speak out on the bigotry of Islam, too.

Q: But is it really the rest of the world’s business to criticize Islam’s treatment of women and gay people?

A: Yes. For the same reason it was the rest of the world’s business to pressure South Africa to end Apartheid. The American Left was vocal about that issue, but hey, that’s because the pro-Apartheid forces in South Africa didn’t roam the globe blowing up people, derailing trains or piloting planes into the sides of buildings. If they had you can bet the American Left’s reaction would have been to drop to their bellies and crawl like they do for Islam, all the while pretending they are

taking a “principled stand” about not forcing external values on another culture.

Q: Do you agree with Barack Obama’s remark that the Muslim world has moral superiority to the western democracies because of Colonialism?

A: No, because he’s ignoring the fact that Islam was NOT the indigenous belief system throughout Africa. MUSLIM COLONIALISM in Africa preceded Western Colonialism. Obama unilaterally condemns “the west” as part of the usual intellectual laziness of American Liberals. They think it makes you automatically “deep and intellectual” to trash your own country and its allies. Islam spread throughout Africa and elsewhere by the sword and in a sea of blood. If you oppose “Colonial Oppression” then you would also need to oppose Islam on the same grounds. Unless, of course, you’re a poseur and a hypocrite, like Obama.

Q: Given the fact that Obama has spinelessly crawled on his belly for the Muslim world and yet they still behave this way is this proof that kowtowing to religious fanatics is not the way to deal with them?

A: Yes. If the world had been this cowardly about dealing with Christian fanatics we would all still be living like the 1600′s Puritans.

Q: Why has Obama’s subservient approach to dealing with the Muslim world been such a complete failure?

A: For the same reason the rest of his presidency has been such a complete failure. He can’t accept the fact that solutions that sound good in a classroom setting do not work in the real world.

Q: Is it just another indicator of the American Left’s loss of credibility that they insist on pretending a half- dozen Christian fanatics killing an abortion doctor each over the course of decades is ” the same as” the untold thousands of Muslims who crawl out from under rocks to perform multiple killings and other acts of savagery every single year?

Q: Is it a complete waste of time for people to wimpishly whine to you about the wry observations made in this post?

A: Yes. I don’t need spineless or masochistic people weighing in with the peepee- caca level observation that could be paraphrased “Golly gee willikers! Can’t we all just agree to look for the good in everyone and never, ever criticize anybody … except for Americans?” Even more than being a waste of time it’s an example of how brainwashed this society has become that it blanches at strongly-worded criticism of anyone EXCEPT Christian conservatives. Nobody bothers me with whiny, touchy-feely gibberish to defend THEM when I criticize them.

Q: What is the only question worth asking at this particular moment in history?

IF ANYONE REPLIES TO THIS POST WITH COMMENTS MAKING THE SIMPLISTIC ARGUMENT THAT NOT EVERY MUSLIM IN THE WORLD BEHAVES THIS WAY I WILL CONSIDER IT SPAM AND DELETE IT. THAT IS SO BLATANTLY OBVIOUS THAT IT GOES WITHOUT SAYING. IF YOU ARE EVEN THINKING ABOUT LEAVING SUCH A COMMENT ASK YOURSELF WHY YOU DON’T ALSO ROAM THE INTERNET AND JUMP IN TO DEFEND AMERICANS WHEN THEY GET BASHED BY SAYING “NOT EVERY AMERICAN IS RESPONSIBLE FOR ( insert your favorite complaint about America here). “

One response to “ISLAM’S HOMOPHOBIA AND MISOGYNY: SOME FAQ’s”