STARSHIP INVASIONS (1977) – This Canadian venture (also released as Project Genocide) is a bad movie classic and I don’t know why I kept putting off reviewing it for so long. I’ve been in love with this baby ever since I first saw it long years ago.

It combines the campy fun of the old television series UFO with that of countless 1950’s and 1960’s “invasion of Earth” movies. The ridiculous uniforms of the aliens make it hard to stop laughing as you watch events unfold. They communicate telepathically (in voiceover for the benefit of viewers) so they never speak, which is another source of fun since their facial expressions never seem to change no matter how heated the telepathic conversations get.

Our movie opens up with a UFO shooting a rather heavy Canadian farmer in an Elmer Fudd hat with a paralyzing ray, then abducting him. While in the aliens’ custody the farmer is confronted by one of his captors – a beautiful nude woman. The two have sex and return the farmer to his home, following which he tries to tell the authorities about his experience but they don’t believe him. 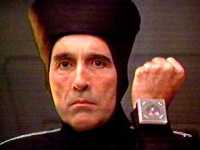 “Cushing gets Star Wars and I’m stuck in THIS crap!?”

It turns out the abduction was just a convoluted way to get a sperm sample from an Earth male. The aliens – led by Christopher Lee as Captain Rameses – also obtain an egg sample from an abducted Earth female. Those samples confirm that Rameses’ own race were created through cross-breeding between an outside alien race and humans that those aliens abducted eons ago for breeding purposes.

This information would shatter the religious beliefs of Rameses’ people so he orders it kept secret. Originally he and his crew were simply going to launch a relocation of their home planet’s population to Earth since their own sun is about to go nova. However, to prevent the blasphemous info about their race’s own hybrid nature from ever getting out Captain Rameses decides that rather than try to share the Earth with its native inhabitants they must all be exterminated instead.

The relocation and the genocide would violate interstellar law as enforced by the Intergalactic League of Races, an alliance of multiple alien races from around the universe. The League’s HQ on Earth is an undersea pyramid in the Bermuda Triangle. Rameses’ crew check in there for some refueling and r&r, but must keep the true nature of their mission a secret or the League will stop them.

Elmer Fudd is about to get lucky.

Unfortunately for the conspirators UFO nut Allan Duncan (Robert Vaughn himself) has been interviewing contactees, including the farmer who provided the sperm sample. The Intergalactic League of Races’ subaquatic base is monitoring a television show in which Duncan talks about the abducted farmer and similar cases. Rameses realizes this has made the League suspicious of his crew’s unexpected visit to Earth so he takes drastic steps.

Our villain has some of his crew unleash their Suicide Ray, causing all the abductees to kill themselves to prevent them from revealing any more info that might lead the League right to Rameses’ door. The evil Captain also has his sexpot crew member (the one who got the sperm sample from Elmer Fudd Jr ) sabotage a League of Races starship right before it leaves the base on a mission of investigation.

The Suicide Ray in action

Next Rameses and his crew wipe out all League personnel in the subaquatic pyramid and he summons their entire fleet of starships, which have been hiding on the dark side of Earth’s moon. The fleet spends the next few days roaming the world using their Suicide Ray weapons to force more and more Earth people to kill themselves. This causes a worldwide panic since literally hundreds of thousands are offing themselves every day. Some victims of the ray-gun inconsistently kill other people THEN themselves with no rhyme or reason.

Meanwhile, the survivors of the sabotaged League spaceship form an alliance with Robert Vaughn’s UFO nut and one of his more scientifically-minded colleagues so that repairs can be effected on their damaged craft. From there it’s all pretty predictable. Vaughn and the good aliens thwart Christopher Lee and the bad aliens. The invading fleet of starships gets destroyed and Captain Rameses himself rams his own vessel into the moon rather than surrender.

This little honey makes great eye-candy with all the lame spaceships, plastic heads on some of the alien races plus you can add Space Prostitutes and absurd-looking robots to the fun. The scenes of mass suicide might be a bit much for young viewers but otherwise this is one hilariously campy mess of a film that can be watched and laughed at over and over again. It would make a great opener in a Christopher Lee double-feature with End of the World as the closer.