THE VISITOR (1979): AN INCREDIBLY WEIRD MOVIE

Like the poster? Too bad! It bears no resemblance to ANYTHING that happens in the actual movie!

THE VISITOR (1979) – This Italian-made movie deserves a Plan 9-sized cult following so I’m surprised that it’s still com-paratively unknown. The film is directed by “Michael J Paradise” (Giulio Paradisi) and features appearances by such name stars as Franco Nero, Glenn Ford, Lance Henriksen, Shelley Winters, John Huston, Sam Peckinpah, Kareem Abdul Jabbar and Mel Ferrer. Paradisi directs this film in such a way that the actual point of most scenes is lost because virtually every shot includes extraneous footage completely irrelevant to the storyline. The extra footage just distracts from what otherwise might have been a halfway passable sci-fi thriller.

Never before has anyone used the words “This movie could have used more Kareem Abdul- Jabbar” but they apply to this flick.

All that being said I want to point out that I disagree with the general consensus that The Visitor makes no sense. Sure, it has plotholes, inconsistent behavior from the characters, poorly chosen reaction shots and villains who over-complicate things for themselves, but the basic story DOES make sense. In fact I bet X-Files fans would like it and would immediately understand what’s going on.

Part of the confusion can be attributed to the edited version that omits so much footage that it’s difficult to understand what is going on. It’s not always easy to understand what’s going on in the complete 108 minute version, either, but at least it retains all the relevant footage. Since so many people seem lost when they first watch this movie I’ll provide a handy synopsis of the film. It’s not quite right to say there are spoilers ahead since most people apparently don’t understand what is going on when they watch the film anyway.

At its core The Visitor is trying to imitate movies like The Omen, Close Encounters of the Third Kind, Rosemary’s Baby, The Fury, God Told Me To and Chariots of the Gods. You might say parts of it are influenced by the bizarre myths of Scientology, too. The biggest omission of the edited-down version is the opening scene. By leaving that out of the film the distributors pretty much guarantee that the story will seem like an incoherent mess.

WWSJD: What would Space Jesus do?

That scene features Franco Nero as a figure I like to call Space Jesus, because he’s clearly made up to look like Jesus as he’s depicted in Christian beliefs. He’s surrounded by bald-headed children and he’s telling them the story of a long-ago battle between forces led by a “good” alien and forces led by an “evil” alien. The evil alien – sometimes called Sateen and other times called Zathaar – was defeated and over the centuries all of his descendants that were born of earthly women were likewise vanquished. Obviously this is the now-overused “God and Satan were really aliens” concept combined with the story of how the Watchers in Bible myths mated with Earth women.

There is only one woman on 20th Century Earth able to carry Sateen/ Zathaar’s seed to fruition and she’s already had a daughter. A group of wealthy conspirators are followers of Sateen/ Zathaar and want that woman to give birth to another child – a boy this time – so that he and his sister can mate and spawn a new army of evil, powerful entities.

John Huston – one of the good guys (though it’s often hard to tell) – comes down to Earth with a bunch of the bald children, who manifest on Earth as adult bald men. Huston – whose character adopts the Earthly name “Jerzy Colsowicz” (?) – sets up headquarters on a rooftop in Atlanta. Throughout the movie we see his bald henchmen carrying boxes to that rooftop and doing shadow-dances behind screens. (???) How this furthers their goal of thwarting the Zathaar cult is beyond me.

Lance Henriksen plays Raymond Armstead, the owner of the fictional Atlanta Rebels pro basketball team. (IMDb reviews tend to describe him as the “coach” but it’s made clear from the very beginning that he’s the owner.) He’s at a game with his girlfriend Barbara (Joanne Nail), the oblivious woman who can carry Zathaar’s seed, and her 8 year old daughter Katy (Paige Conner), the evil child that the conspirators want to mate with Barbara’s next child. Katy uses her supernatural powers to let Raymond’s team win the game.

It turns out that isn’t the only “extra” help Raymond’s team has gotten. The unscrupulous team owner outdid even Mark Cuban by making a deal with the rich and powerful Zathaar cult. They engineered things so he would get everything he needed to turn his piss-poor Rebels into a winning franchise. (Yep, he figuratively “sold his soul” for a winning basketball team.) In exchange for that Raymond was supposed to convince Barbara to marry him and have a son, little dreaming the ultimate goal is to have that son mate with Katy.

Raymond is getting leaned on by the conspirators, led by Mel Ferrer. So far he’s failed to keep his end of the bargain because Barbara refuses to marry him and doesn’t want any more children. Barbara is oblivious to her role in the evil schemes of Mel Ferrer and company but she’s so creeped out by what a malevolent little bitch Katy is that she doesn’t want any more children. The conspirators have so much influence they could easily have Raymond drug Katy during one of their nightly trysts and then just artificially inseminate her, yet they waste months waiting for him to convince her to marry him instead.

Katy meanwhile uses her powers to brutalize and kill some obnoxious teen boys who were picking on her at an ice skating rink. Katy IS fully aware of the conspiracy and she often nags her mother to marry Raymond so she can have a brother. Those bits are extra creepy since Katy knows she will be mating with said brother.

Glenn Ford shows up as a detective investigating Katy’s “accidental” shooting of her recalcitrant mother at her (Katy’s) birthday party. The mother is paralyzed and confined to a wheelchair and Ford is suspicious of Katy due to her vile and abrasive ways. She curses Glenn out in an UN-intentionally hilarious scene, then uses her control of hawks (just go with me on this) to have one attack the detective while he’s driving, killing him in a car crash.

Shelley Winters plays Jane Phillips, a live-in nurse taking care of Barbara after she’s paralyzed. Jane loves singing Short’nin’ Bread and, like just about everybody else in this film she’s got a secret agenda. Turns out she once gave birth to one of Zathaar’s spawn decades earlier and killed the child once it was clear how evil it was. She threatens to do the same thing to Katy, but it’s never explained why she doesn’t.

Sam Peckinpah, as our heroine’s ex-husband, gets it right as an abortionist that Barbara goes to when she discovers she’s pregnant. That pregnancy occured when Mel Ferrer and his fellow conspirators at last did what they should have done much earlier – they send forth their goons in a VERY X-Files-ish scene to abduct Barbara and artificially inseminate her. As always Raymond fails to serve his benefactors well, letting Barbara slip away for the abortion. An angry Katy shoves her wheel-chair bound mother through a fish-tank in revenge, but Barbara doesn’t get so much as a scratch. (?)

Katy seems to be consigned to a mental hospital for treatment after this but, naturally, that institution is in on the conspiracy. The little demonic girl surprises her mother in their home and proceeds to beat her, then drags her up the stairs over and over again only to kick her down them repeatedly. This woman takes almost as much abuse as Bruce Campbell’s Ash Williams takes in the Evil Dead movies.

Raymond shows up and starts to strangle Barbara with wire, when John Huston and the forces of “good” finally get off their asses and DO something. They have their own flock of birds – doves, compared to the hawks controlled by Katy – kill Raymond and then peck Katy to pieces. It’s like an outtake from one of the Holy Ghost Spaghetti Westerns. As for Mel Ferrer and the conspirators, their black butler – really a spy for the good guys –  finds them all dead with some kind of black marks on their bodies. 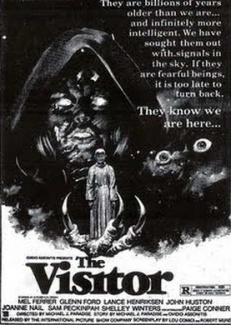 Barbara has survived her ordeal (but good luck explaining to the cops what happened to your boyfriend Raymond and your daughter Katy) and John Huston returns to where he came from at the beginning of the film. A bald Katy is with him and is all-good now. Huston says that children cannot be killed – just the evil in them can be. Franco Nero as Space Jesus smiles in approval now that the threat of the Zathaar cult has been eliminated forever. (This is why some IMDb reviews claim Franco Nero has no lines in the movie.)

“Welcome to Hair Club for Prepubescents!”

The versions of The Visitor that leave out the opening scene with Franco Nero set it up so that this shot of Space Jesus is the big reveal that lets viewers understand what’s going on, but as reviews of the shortened version indicate all they really accomplished was to make the flick seem like incomprehensible trash. Many viewers seem too disgusted by the end to feel that the story is redeemed in any way by this “Ohhhh, they’re implying Jesus was an alien” ending.

Despite the preceding synopsis I would recommend The Visitor to all fans of bad and weird movies. Even with the storyline clarified it is STILL monumentally bad, awkward and loaded with WTF moments that guarantee 108 minutes of laughs. The soundtrack alone is worth it, given how it thunders portentously when nothing is happening then goes silent for major plot developments. Keep the mute button handy for scenes where John Huston climbs up or down staircases. The soundtrack goes into overdrive in a “You’ll believe a man can climb stairs” kind of way.