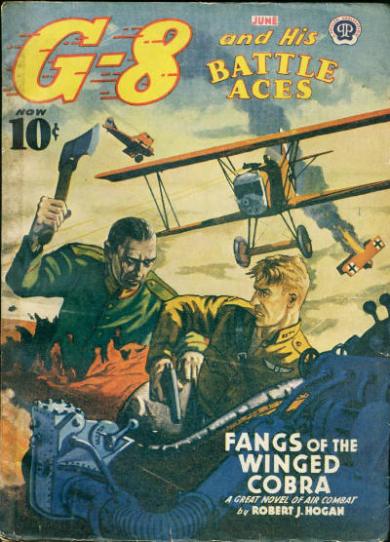 Baron Von Tollheit has designed these devices so they can be fitted to aircraft and he sends them into the skies to drive all Allied planes from the air. Total air supremacy for the Central Powers will be just the start, however, as Von Tollheit’s invention will next be used to reduce all Allied ground troops to drooling idiots with mush for brains.

G-8, Bull and Nippy are the only hope of defeating the Baron and saving their comrades-in- arms from a horrific fate! On the lighter side at one point in this tale Bull, Nippy and Battle disguise themselves as women with G-8 playing their brother! Featuring not one but TWO aerial dogfights between our hero and Von Tollheit.

92. FANGS OF THE WINGED COBRA (June 1941) – If you noticed this issue came out TWO months later rather than the usual one month later that’s because G-8 and company had finally met the only thing capable of slowing them down – the international paper shortage as – in real life – World War Two had already been raging for nearly two years.

From this point on the Pulp magazine came out bi-monthly, not monthly. This story pitted our heroes against another mad scientist – Dr Kommer, who had been performing macabre experiments on human guinea pigs in the German Empire’s colonies in Africa. The Kaiser summoned him home to use his master creation to eliminate the hated Americans G-8, Bull Martin and Nippy Weston.

Basically Dr Kommer’s schtick was the same as G-8’s Austrian foe Dr Mollfuss – he combined animal and human features to create bizarre hybrids. Kommer has managed to give a human man the equivalent of a cobra’s eyes … making him the perfect flying ace. (?) With his machine guns blazing and his battle axe at the ready the human guinea pig takes to the air as the Winged Cobra, inspiring giggles – I mean terror – in the Allied pilots he battles. Is it just me or would “Snake Eyes” have been a better name for this foe?

93. DEATH IS MY DESTINY (August 1941) – Another story and another new villain. And once again that new villain’s plan is basically a rehashing of so many previous menaces our heroes have already defeated. Yes, the Pulp downside of repetitious storytelling couldn’t help but rear its head more and more frequently after ninety-three adventures.

Herr Karg is the derivative bad guy of this tale. His yawn-inducing plot – to wipe out Allied aircraft with a giant craft that is part Zepellin and part bomber, all disguised as a gigantic eagle. Yes, exactly like Doktor Krueger used so long ago.

No doubt with the battle cry of “Not even Deja Vu can stop us” G-8 and his Battle Aces fly into action to outmaneuver and bring down the deadly construct which has downed countless Allied planes.

16 responses to “PULP HERO G-8 AND HIS BATTLE ACES: STORIES NINETY-ONE TO NINETY-THREE”