Tag Archives: Wings of the Doomed 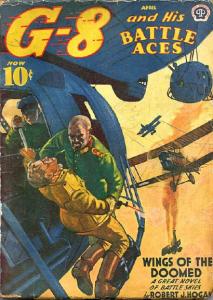 Baron Von Tollheit has designed these devices so they can be fitted to aircraft and he sends them into the skies to drive all Allied planes from the air. Total air supremacy for the Central Powers will be just the start, however, as Von Tollheit’s invention will next be used to reduce all Allied ground troops to drooling idiots with mush for brains.
END_OF_DOCUMENT_TOKEN_TO_BE_REPLACED