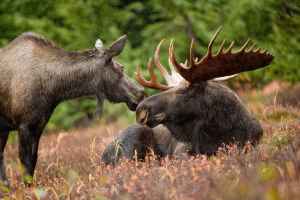 ONHDAGWIJA – The moose goddess. Onhdagwija wandered the forests interacting with and looking after the animals she ruled over. The most prominent myth featuring her depicts her falling in love with an Iroquois hunter. She assumes human form and begins preparing acorn bread for him in his temporary bark cabin while he is off hunting during the day.

The hunter is curious about who is doing this and “stakes out” his cabin one day after pretending to go off on the hunt again. He catches Ohndagwija doing cooking and cleaning chores for him and she reveals her true identity to him. She promises to be his lover, to make acorn bread and other meals for him and to ensure that he catches large amounts of game. In return the hunter had to promise not to marry and never to reveal that she was helping him.

Years go by and the couple have children together but ultimately the hunter yields to one of the many women throwing themselves at him because of his hunting prowess so Onhdagwija and the children turn back into moose and disappear into the forest forever.