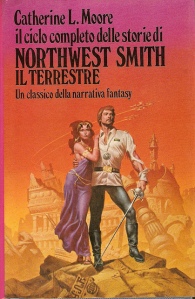 Even though Northwest Smith always used ray-guns but NEVER a sword this artist drew him holding one anyway. Go figure.

Balladeer’s Blog continues its examination of another neglected pulp hero – in this case Northwest Smith. Created by the female author C.L. Moore in the 1930′s Northwest Smith was a ruthless outer-space smuggler and mercenary decades before Han Solo. With his Venusian partner Yarol at his side and armed with a trusty blaster Smith roamed our solar system in his deceptively fast spaceship The Maid. In the course of their criminal pursuits the two often found themselves in the role of reluctant heroes, sometimes with the fate of entire planets at stake. For more on Northwest Smith and other neglected pulp heroes click here: https://glitternight.com/pulp-heroes/

11. QUEST OF THE STAR STONE (1937) – It’s crossover time! C.L. Moore decided to do a story in which her two most famous pulp creations – Northwest Smith and Jirel of Joiry – meet each other. Trouble is Jirel’s adventures take place around the year 1500 while Northwest Smith’s stories are set over 1,000 years later. Any reader of pulp fiction knows that’s no real obstacle so let’s dive in.

The story opens in Jirel’s time. She is leading her obedient band of male outlaws in an assault on the castle of a sorceror named Franga. Our sword-wielding heroine battles her way through to Franga’s chamber where she seizes a mystic gem called the Star Stone. That jewel is so powerful but so unfathomable that even Franga was still trying to discover how to harness its arcane energies. Jirel defeats Franga and forces him to flee between dimensions, but as he leaves he promises Jirel that he’ll return to get revenge on her and get the Star Stone back – just as soon as he finds a champion capable of matching Jirel’s courage, cunning and force of will. “No matter what world or what time I find them in” he adds, letting the reader know what’s coming up.

Cut to an outlaw tavern in a Martian city of the far future. Northwest Smith and Yarol are relaxing after a gun-running caper by slamming down glasses of Segir (Venusian whiskey) and smoking intoxicating Martian cigarettes. Franga arrives via an interdimensional doorway and talks Smith into accompanying him by promising a huge fee. Yarol tags along uninvited and Franga transports the pair to the year 1500 outside Jirel’s Castle Joiry. Northwest and Yarol (despite Yarol’s alien appearance) get themselves taken to Jirel – whom we see in the meantime has been keeping the Star Stone as a good luck charm.

Per Franga’s instructions our two outlaws from the future convince Jirel to confer with them about a non-existent treasure they supposedly want to join forces with her to plunder. At a crucial moment the pair are able to drag Jirel and the Star Stone through one of Franga’s portals, where Franga confronts them all. They are now in a perpetually night-dark realm with odd spongy ground and where the stars are so close to the surface of the world that they seem like streetlights overhead.

Franga’s magic power is at its height in this enchanted dimension where he can turn the mists solid with a gesture and command the starlight to blaze down like blaster-fire on his foes. In return Smith and Yarol have their ray-guns and Jirel her blade. The sorceror plans to recover the Star Stone then torture and kill Jirel, Northwest Smith and Yarol before conquering the Earth. A running battle takes place through this bizarre realm and onto solid pathways that climb to the stars. Our trio of heroes also must contend with the undead, emaciated man-beast zombies that prowl the dark world.

Just when everything seems hopeless for our comparative “good guys” Smith destroys the Star Stone, revealing that for millenia it has been a prison for alien beings of pure energy. They are fully aware of what’s been going on and so they destroy the evil Franga while restoring Northwest, Yarol and Jirel to their own time periods. We’re supposed to believe Smith “fell in love” with Jirel during this brief adventure prompting a now- morose Northwest to try to escape his longing for her in booze and other intoxicants with his pal Yarol.

** At some point in the future I will do a story-by- story examination of Moore’s Jirel of Joiry series of tales. **

12. WEREWOMAN (1938) – That is a cosmically unoriginal title for what may well be the most intriguing and narratively challenging Northwest Smith story of them all. A title like Forbidden Desert or even a Pulp-ish Desert of Doom would have been more appropriate. Hell, calling it Northwest Smith Meets Peyote would at least convey more of a feel for the subject matter. Anyway, I’ll try to do the various layers of this story justice with this review.

Now on Earth after another smuggling run Northwest Smith (but not Yarol, whose whereabouts are never explained in this story) is hanging out at yet another lowlife establishment catering to fugitives and career criminals of all kinds. The place in question is in a city bordering the desert of the American west, so a modern adaptation of this story could set it in futuristic Las Vegas, whose reputation as a gambling mecca was not yet established when C.L. Moore wrote this tale.

The criminal saloon is raided by an army of bounty hunters looking to make a huge haul off the rewards on the heads of the wanted figures who frequent the establishment. A large-scale firefight breaks out in the dive and spreads to the streets and even to the nearby desert where Smith and a few other fugitives have headed. After a lengthy running battle Smith’s blasters are completely out of power and he is unable to return fire any longer, prompting him to make the suicidal choice of fleeing into the Forbidden Desert.

Injured from a ray-blast that creased his shoulder, a weary Northwest forces himself to keep running, preferring to die in the desert rather than get captured and sent to prison. After fleeing the remainder of the night, through all of the next day and now into the following evening our protagonist is exhausted and near delirious from pain and the heat. Smith’s delirium plays a part – but only a part – in the surreal nature of the tale that lays ahead.

The Forbidden Desert has been avoided for a very long time, ever since an enigmatic scientific disaster from several hundred years earlier, which would place the event mere decades in the future of the 1930’s in which Moore wrote. That scientific disaster not only rendered the western desert even more inhospitable than before but mutated what few life-forms were able to survive. Today of course we would just call it a nuclear incident or say it involved biological warfare agents. Writing in 1938 C.L. Moore did not yet have the atomic age vocabulary that would eventually render such stories cliched.

It is interesting to see Moore struggling to convey what happened while lacking the narrative shortcuts that later scientific jargon would have made simpler. Her way of using Smith’s addled mental state to veil and obscure some of what she hints at is very intriguing. And Smith’s mental state will get even more distorted as we move on, making the narrative more surreal by the paragraph.

In this otherworldly wasteland Northwest Smith encounters a howling pack of what he calls “werewomen” but which are really mutated women with skin as white as sun-bleached bones, green eyes and long, flowing black hair. In typical pulp-hero fashion the she-wolf people are impressed and attracted by our hero’s fierce defiance as, completely unarmed, he tries to face down the roaming pack of predators. In fact the naked females are SO impressed with this uncharacteristic display of courage from one of their intended prey that soon two of the Alpha Werewomen are fighting it out to claim Smith as a mate.

The winner kills the loser and a far-gone Smith falls in with the pack, sucking moisture out of cacti like they do and feeding on the insides – which in this story means he’s ingesting peyote and/or mescaline with each meal in this scientific aberration of a desert. Soon he’s howling like the ladies and roaming with them, adding another interesting layer of distortion to the narrative. (As well as making the reader wonder how comparatively civilized and lucid the werewomen might be if they weren’t living on a steady diet of hallucinogenic cacti.)

In his days of traveling with the pack Northwest encounters more of the mutated plant and animal life of this desert which has been declared off-limits for centuries. The pack also comes across a band of bounty hunters who were foolhardy enough to pursue Smith into the Forbidden Desert and, viewing them as prey they attack them, kill them and feed on the remains. Smith doesn’t seem to participate in the cannibal feast but it’s impossible to be sure given the way this story is written. Picture a sci-fi post-apocalypse version of Naked Lunch and you’ll see what I mean.

As “Goes Tripping With Wolves” continues the pack travel through more of the wasteland, periodically adding Locoweed (marijuana) to their diet of peyote- fortified cacti. They also travel through long-abandoned buildings which – through the haze of Smith’s chemically-altered mind – seem to be the remains of a city wiped out by the nuclear or biological disaster. In the ruins of what must be the scientific base conducting those long-ago experiments that went awry are the corpses of people in what we would call Haz-Mat suits.

In a hauntingly macabre touch some of the figures in Haz-Mat suits crawl around aimlessly as if containing bodies mutated and/or preserved by whatever atomic or biological forces were unleashed in the laboratory. “Chaining them in earthbound misery for centuries” as the narrative chillingly puts it.

The pack leaves the ruins and its members – our hero included – begin drinking happily from a river near the remains of the laboratory. Unfortunately a creature who is like a liquid-clear version of the Blob from the 1950’s movie lurks within the water and attacks the pack. The blobbish creature absorbs its prey, mutates them as they travel along its see-through digestive system, then expels their distorted remains days later. Northwest Smith and his “mate” are the only ones who escape the river without falling prey to the watery blob.

Unfortunately the thing begins oozing and pouring along the ground, chasing after the pair. Unable to escape the gooey, watery mass a half-lucid Northwest Smith crudely pieces together what power- source is fueling the watery blob of protoplasm and destroys it. The destruction unleashes some havoc of its own and our hero’s erstwhile mate flees in primitive terror.

Alone again our protagonist resumes stumbling through the desert, sucking moisture and nourishment from cacti along the way until he at last emerges on the other side of the supposedly unsurvivable wasteland. Smith is nursed back to health by some obliging citizens of the non-bounty- hunter variety as our story ends. At least Moore could have had it be Yarol who finds our hero and revives him. Fans of Smith’s Venusian partner will be glad to know he’s back by the following story.

BE HERE NEXT TIME FOR MORE NORTHWEST SMITH!