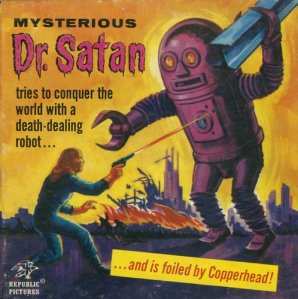 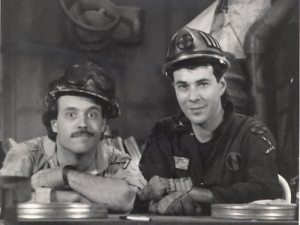 EXTRAS: This episode featured Randy and Richard’s interview with Denver Pyle, who appears in the film being riffed on, The Party Crashers. They taped the interview with him at Ben Johnson’s ranch earlier in the year. The interview would be rerun when The Texas 27 Film Vault showed The Flying Saucer, another film with Denver Pyle in a supporting role. OR as some T27FV fans have claimed The Flying Saucer was shown by Randy and Richard during the summer of 1986 so the Denver Pyle interview was being run for the second time in TONIGHT’S episode. When or if I can confirm or nail down the specifics I will adjust this entry.

SERIAL: Before presenting and mocking The Party Crashers our machine-gun wielding Film Vault Technicians First Class presented and mocked an episode of Mysterious Doctor Satan, a Republic serial from 1940. The serial featured a mad scientist called Dr Satan trying to take over the world with a VERY goofy- looking robot while a pulp-style hero called the Copperhead tried to thwart his plans. 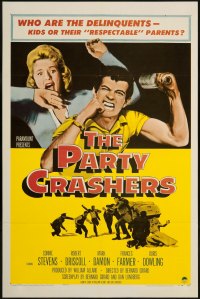 THE MOVIE: THE PARTY CRASHERS (1958) – Connie Stevens, Bobby Driscoll, Mark Damon, Frances Farmer and the aforementioned Denver Pyle star in this unintentionally hilarious movie about a group of JD’s whose M.O. is to crash parties at upper-class homes, help themselves to food, drink and women and then vandalize the place. Connie is torn between her bland boyfriend and the sleazy leader of the Party Crashers. All the teenagers are spoiled and unlikeable and all the adults are alcoholics or bloated rich pigs. This movie is one long laugh festival!