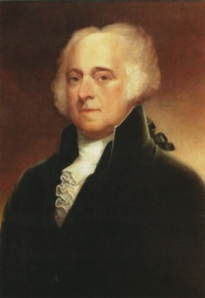 John Adams called the Vice Presidency “the most insignificant office that ever the invention of man contrived.” A very old joke went “Once there were two brothers. One ran away to sea and the other became Vice President. Neither was ever heard from again.” In George S Kaufman’s and Morrie Ryskind’s classic stage work Of Thee I Sing one of the characters turns down an offer to be Vice President because he’s ashamed to have his mother know. He’s persuaded to accept the office when it’s pointed out that if he doesn’t tell her about it she’ll never find out.

The office has featured eminently forgettable figures as well as comic relief buffoons like Dan “The Global Village Idiot” Quayle and Joe “Koo Koo For Cocoa Puffs” Biden. In the light-hearted style of Balladeer’s Blog’s look at U.S. Presidents here’s a look at the men who got to hang around and see if the country’s Chief Executive wound up six feet under. I’m omitting VP’s who went on to actually become President, so no John Adams or Thomas Jefferson, etc.

Noted for: Shooting dead more Treasury Secretaries and hatching more plots to start his own country than any other Vice President.

Served Under: Jefferson and Madison

Noted for: Leading American Rebel forces against the British troops of his loyalist cousin Sir Henry Clinton during the Revolutionary War.

Noted for: Pioneering the method of “Gerrymandering” political districts in a way that the modern day Democrats and Republicans have raised to a mainstay in the world of white collar crime which they inhabit.

Noted for: Being ruined by a scandal in which he was mistakenly accused of pocketing some of the funds he raised to conduct the War of 1812. Years later it was all revealed to be an accounting error.

Served Under: JQ Adams and Jackson

Noted for: Siding with his state over his country during the Nullification Crisis and for becoming the first Vice President to resign. Also for looking like a drummer from a 1980s Hair Metal Band.

Noted for: Supposedly killing the Native American leader Tecumseh during the War of 1812 and for being labeled the most vulgar man in the world by the doorman of the U.S. Senate!!! Plus you have to love one of the campaign songs that was used for the Van Buren/ Johnson ticket: “Rumpsy Dumpsy/ Rumpsy Dumpsy/ Colonel Johnson/ Killed Tecumsy.” I’m not kidding.

Noted for: Having the most famous city in Texas named in honor of him during the Mexican War. If the people involved had gone with the President instead of Vice President the Ewings would have been featured in a tv show called Polk.

Noted for: His alleged homosexual affairs with male slaves on his Alabama plantation and with future U.S. President James Buchanan. Also for dying just six weeks after taking office, most of which time he spent convalescing in Cuba. Yes, Cuba.

Noted for: Being an inept Confederate General in the Civil War right after his term in office ended.

Noted for: Serving in the Maine Coast Guard while also serving as Vice President since the Civil War was raging at the time. He served as a PRIVATE (!) and cooked food for his unit.

Noted for: Suffering as an indentured servant from age 10 to 21 and for having two strokes while serving as Vice President. The second stroke was fatal.

Noted for: Being too honest to be bought by the Credit Mobilier Corporation, making him about the only person in Washington to escape being tainted by the ensuing scandal.

Noted for: Publicly advocating that his own running mate should drop out of the race (over the scandal surrounding Cleveland fathering a child out of wedlock) because he hoped he would thus become his party’s de facto Presidential candidate.

Served Under: B Harrison

Noted for: Ticking off President Harrison and his administration so much with his favoritism to the opposition party that he was bumped from the ticket for Harrison’s failed campaign for reelection. The opposition party, which had played Morton like a piano when he would preside over the Senate, gave their pawn a farewell reception.

Served Under: Cleveland, Round Two

Noted for: Being an ancestor of M*A*S*H’s MacLean Stevenson as well as the Adlai Stevenson who got crushed by Eisenhower in two presidential elections.

Noted for: Using his Vice Presidential tie-breaking vote in the Senate to cast the deciding vote to make the Philippines a U.S. protectorate instead of granting them the independence the Filipinos had fought Spain for.

Noted for: Working with Speaker of the House “Uncle” Joe Cannon in a futile attempt to undermine the legislative agenda of the extremely popular president he served under. House of Cards goes to the early 1900s! Also, Fairbanks, AK is named after him.

Noted for: Manipulation behind the scenes to increase the hostility between Taft and former president Theodore Roosevelt. The plan succeeded but did nothing to advance Sherman’s ambitions to become President himself some day. It’s The Rule of Two I guess – One to hold power and one to covet it.

Noted for: The old saying “What this country needs is a good five cent cigar” and for sending condolences to his successor as Vice President. Also for not forcing a Constitutional crisis when Woodrow Wilson was so debilitated by a stroke that many were urging Marshall to assume the presidency by claiming Wilson was no longer fit for office.

Noted for: Winning a Nobel Peace Prize back when it meant something to win one and for speaking out against the Ku Klux Klan in an age when it was politically risky to do so. His nickname came early in his career from some of his famed testimony regarding military spending during World War One.

Noted for: Being one\eighth Kaw Indian via his great- grandmother, who probably would have done a better job managing the economy than either Hoover OR Curtis.

Noted for: Helping to smooth the congressional path for much of FDR’s New Deal legislation and for opposing FDR’s court-packing scheme. Also for drinking bourbon and branch water with various Congressmen back when he was Speaker of the House.

Noted for: Being the flaky, air-headed Jerry Brown of his political era. If Wallace was alive today he’d be calling Psychic hotlines and probably be a practicing Wiccan.

Noted for: Resigning and striking a deal for a “no contest” plea to avoid going to jail for bribery and tax evasion. Also for the way the letters in the name Spiro Agnew can be rearranged to spell out “grow a penis”. Try it yourself and see!

Noted for: Having billions of dollars and for having Ford bump him from the ticket in favor of Bob Dole. How would you like to have gotten to overhear THAT little conversation?

Noted for: Saying “Where’s the beef” to Gary Hart. Also for the way his association with the failed presidency of Jimmy Carter led to him only getting 17 electoral votes in the 1984 presidential election.

Noted for: Redefining the expression “political lightweight” and for spouting some of the dumbest remarks ever heard outside of a sitcom.

Noted for: His ridiculous claim that he invented the internet and for hypocritically selling his “green” television network to oil-rich (aka major fossil-fuel burning) Middle East money for so much cash it made him even more of a bloated rich pig than Mitt Romney.

Noted for: Multiple conflicts of interest regarding defense contracts and for being the worst hunting partner in history.

Noted for: Accusations of plagiarism in the 1980s and for lowering the intelligence level of an already repulsive 2012 campaign season by acting like a high school freshman during the Vice Presidential debate.

FOR MY IRREVERENT LOOK AT U.S. PRESIDENTS CLICK HERE: https://glitternight.com/2012/02/19/balladeers-blogs-presidential-pros-and-cons/

AND FOR MORE OF MY TAKES ON MINDLESS LIBERALS AND MINDLESS CONSERVATIVES CLICK HERE: https://glitternight.com/category/liberals-and-conservatives/

8 responses to “VICE PRESIDENTS: A LOOK AT HISTORY’S SECOND BANANAS”