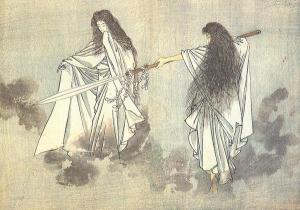 IZANAGI AND IZANAMI – These two parents of most of the rest of the deities in Shinto myths always need to be mentioned in one entry. Before life on Earth existed the two of them stood on Ukihashi, the floating bridge between Earth and Takamagahara, the High Plain of Heaven where the gods lived. From there they stirred the primordial juices here on Earth with a jeweled spear and created the Japanese islands and a shrine still stands on Onokoro, the tiny island that legend held was the first landmass created by the duo.

Their first coupling spawned either one slug-like creature or all of the demons and monsters in Shinto mythology (accounts vary). Beginning with their second mating the woman, Izanami, began giving birth to various landmasses, animals and humans as well as gods and goddesses like the sun goddess Amaterasu, the moon god Tsukuyomi, the storm god Susanowo, the rice god Inari, the dance goddess Uzume and countless others. Their son Sarutahiko they named the guardian god of Ukihashi, the floating bridge, and for a weapon gave him the jeweled spear they had used to stir the primordial broth on Earth.

Their last-born child was Kagatsuchi, the god of fire, and the trauma of his flaming birth proved potent enough to kill even a goddess like Izanami. She became the goddess who ruled over Yomi, the land of the dead just like the slain god Osiris in Egyptian myths became the ruler over the dead. Longing to be reunited with his wife, Izanagi journeyed to Yomi to visit Izanagi. He encountered her in the realm she now ruled over, deep within the Earth. She still had eight deities in her womb when Kagatsuchi’s birth caused her to die and those entities became the eight earthquake goddesses, who roar like thunder from the subterranean land of Yomi.

When Izanami, who was now in the form of a perpetually rotting corpse failed to trick Izanagi into bringing her back to the world of the living with him, she vowed to drag one thousand living souls down to the world of the dead with her every day. Izanagi countered this by causing one thousand five hundred new souls to be born each day. In the Kojiki it was not until after this encounter and his escape from Yomi that Izanagi alone gave birth to the sun, moon and storm gods from his eyes and nose. I prefer the version of the myth in the Nihongi, in which BOTH he and Izanami are their parents.