DJANGO THEATER: A LOOK AT THE FILMS OF THE MOST DURABLE SPAGHETTI WESTERN GUNSLINGER 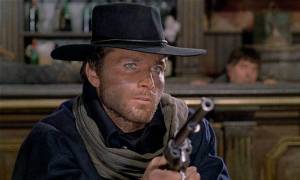 Like Tarzan, James Bond and Sherlock Holmes the melancholy bounty hunter Django has been presented in various incarnations and with wildly differing continuity. And like soccer the Django movies have been an enormous success almost everywhere except the U.S. The gunman’s most recent iteration will be as an African American in Django Unchained, Quentin Tarantino’s upcoming reboot of the Spaghetti Western hero’s saga.

The great Franco Nero created the role in 1966 in a film so popular in Europe (but banned in the UK for its still- controversial violence) that it spawned a legion of sequels. Some sequels starred Franco Nero or others in the role of Django, while others were just unrelated westerns whose distributors simply  attached a phony Django title to them, sometimes redoing the dubbing to have the lead character referred to as Django, other times not bothering.

In anticipation of the mad rush for the various Django films that will presumably follow the release of the Tarantino reboot with Jamie Foxx Balladeer’s Blog helpfully presents a synopsis of the films featuring (legitimately or not) the most durable Eurowestern hero of them all. And, yes, if you’re wondering, the western bounty hunter Django was indeed the reason George Lucas named that outer space bounty hunter Jango Fett.

DJANGO (1966) – In 1867 Mexico Django, a veteran of the Union army in the Civil War, seeks revenge on Major Jackson, the Confederate officer behind his wife’s death. Jackson and his still-loyal troops, now turned  outright Klansmen, are, like so many other fleeing Confederates,  fighting for the Mexican Emperor Maximillian in the war to keep his throne.   Django battles Jackson’s hooded thugs, even ambushing dozens with the Gatling Gun he keeps concealed in a coffin. When he’s out of men Major Jackson calls on Maximillian’s Imperial troopers for reinforcements and prepares to face Django and the Mexican rebel troops he’s fallen in with. For a detailed review of this unforgettable film click here: https://glitternight.com/2012/08/08/the-original-django-and-two-blaxploitation-westerns-a-primer-for-django-unchained/

DJANGO SHOOTS FIRST (1966) – AKA He Who Shoots First. Django comes into an enormous inheritance from his murdered father, an inheritance he learns he must share with his late father’s unscrupulous business partner, Mr Cluster. Django starts blowing away a host of bad guys as he tries to piece together who is responsible for his father’s death.

DJANGO, A BULLET FOR YOU (1966) – Django uses his guns to protect a group of downtrodden farmers from the villainous, land-grabbing town boss of Wagon Valley. He gets more than he bargained for when it turns out the town boss is conspiring with a railroad tycoon who has lots of money and lots of  gunmen to throw at him.

$10,000.00 BLOOD MONEY (1966) – AKA $10,000.00 for a Massacre. A wealthy land baron hires Django to recover his kidnapped daughter and kill the gang of Mexican bandits who snatched her. Django tries to manipulate the situation so he can get the land baron’s fee AND the bounties offered on the bandits.

DJANGO KILL (1967) – AKA If You Live, Shoot. Django, sporting a gun that fires gold bullets, battles a gang of gay outlaws and other villians. For a detailed review of this odd film click here: https://glitternight.com/2012/07/29/the-most-laughably-weird-spaghetti-westerns/

DJANGO DOES NOT FORGIVE (1967) – Django is in Canada in this flick and as usual it’s very dangerous being related to him in any way. When his sister is raped and killed by a Royal Canadian Mountie (Dudley Do-Wrong?) naturally our hero is out for revenge. His quest is complicated by a Native uprising in western Canada.

DJANGO, LAST KILLER (1967) – AKA The Ultimate Killer. Django is paid by the patriarch of a Clanton- style crime family to kill an outlaw hireling whose testimony could send the old man to prison.  Meanwhile the sole survivor of a family the criminal patriarch had killed comes gunning for the crimelord … and Django.

FEW DOLLARS FOR DJANGO (1968) – AKA Bravo, Django. The twin brother of an outlaw that Django had been hunting joins forces with him to wipe out the gang of Boss Logan, a villainous rancher terrorizing homesteaders.

DJANGO KILLS SOFTLY (1968) – Django saves a woman named Linda from being raped and killed by a gang of outlaws who slaughtered her boyfriend’s family AND all the guests at a nearby hotel. Django’s quest for justice is complicated when he learns that the bad guys may be Linda’s own brothers. Eww! 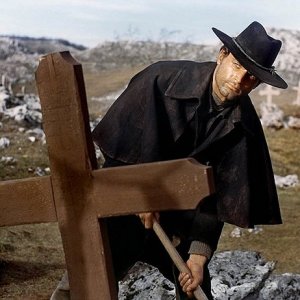 DJANGO, PREPARE A COFFIN (1968) – Our hero rounds up several condemned men and saves them from being hanged.  Django then uses these men with nothing to lose as a combination Dirty Dozen/ Magnificent Seven to help him take on a large gang of outlaw scum.  Django’s coffin- concealed Gatling Gun makes a reappearance in the unforgettable finale!

WITH DJANGO, IT’S BLOOD (1968) – AKA Gatling Gun AKA Machine Gun Killers. During the Civil War Django finds himself trying to save the inventor of the Gatling Gun and thwarts a dastardly plot that would allow the Confederate States to win the war. Sort of a “Brisco County Meets Django” story.

DJANGO’S CROSSROADS (1968) – AKA Johnny Hamlet. Darn the luck, Django’s father gets murdered AGAIN in this film. For a detailed review click here: https://glitternight.com/2012/07/29/the-most-laughably-weird-spaghetti-westerns/

SHOOT, DJANGO, SHOOT! (1968) – A western tycoon hires Django to bring back his errant son, who has fallen in with a gang of Union veterans turned outlaws. The bounty hunter does so, but learns the wealthy villain plans to torture the young man to death because he’s really the illegitimate son of one of his wife’s lovers. Django’s not having it of course and opens up a can of whup-ass.

DON’T WAIT, DJANGO … SHOOT! (1969) – I’m guessing the next film was titled Goddammit, Django, Will Ya Shoot Already? Everyone’s favorite gunslinging loner has a sidekick named Diego this time around. Hired by a family on one side of a range war, Django and his boy wonder use their six-guns on that family’s behalf. When the sexy oldest daughter is kidnapped the Dynamic Duo must save her from their range war foe Don Alvarez AND a lecherous Mexican outlaw named Nico. 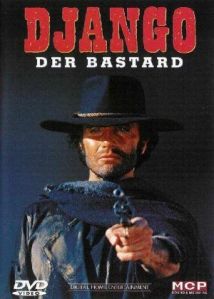 DJANGO THE BASTARD (1969) – Django acts more like a gunslinging version of Jason Voorhees or Michael Myers in this riveting change of pace. Years after the Civil War Django stalks and kills a group of Confederate veterans who stole a fortune in gold and slaughtered their own troops to cover it up. Before each kill Django flaunts a wooden crucifix inscribed with his next victim’s name, birth and death dates. He plants those crucifixes where the victims can see them and helplessly realize they’re next. It’s like A Django Halloween Special.

DJANGO DEFIES SARTANA (1970) – This film matched up Django with the second- most neglected hero of Spaghetti Westerns, the gambler/ gunfighter named Sartana. Django’s brother Steve (apparently their parents exhausted all their creativity on Django’s name) is framed for a bank robbery and lynched. When it looks like the notorious Sartana was the real bank robber Django sets out on his trail. The two cinematic titans clash in the tradition of Dracula vs Frankenstein and King Kong vs Godzilla. After realizing they’ve been had the two join forces to bring down the real culprits.

DJANGO AND SARTANA ARE COMING … IT’S THE END (1970) – Black Burt (yes, Black Burt) and his gang kidnap Anne, the daughter of a wealthy rancher. Django and Sartana team up to deal with the situation, with Django after the bounty on the heads of Black Burt and his gang while Sartana is more interested in Anne herself. She has no idea how lucky she is that it’s the gambler/ gunfighter who has fallen for her and not the bounty hunter since it seems people beloved by Django always wind up  getting killed … sometimes twice.

ONE DAMNED DAY AT DAWN … DJANGO MEETS SARTANA (1971) -Believe it or not that isn’t anywhere near to being the strangest title in Spaghetti Western history. In the future I’ll examine JUST weird titles for Eurowesterns as well as JUST the Sartana movies. For now this flick once again teams up Django and Sartana, this time against an evil town boss and a gang of Mexican bandits who are jointly running a lucrative gun- trafficking scheme.

A MAN CALLED DJANGO (1971) – AKA Viva, Django! In a plotline that’s past ridiculous by this point our hero is on the trail of a gang of outlaws who raped and killed his latest lady love, a woman named Lara. (Ladies, when it comes to Django, just say no!) Needless to say all the men involved fall to Django’s blazing guns by the end of the movie.

EVEN DJANGO HAS HIS PRICE (1971) – AKA Pistol for Django. Our intrepid bounty hunter teams up with a Wells Fargo detective to track down and kill the bank- robbing gang called the Cortez Brothers. One of those “brothers” turns out to be a sultry cross- dressing sister and there’s a subplot about Django and his temporary partner trying to find the lost Cortez Family Gold Mine. Since the Wells Fargo man loves to gamble I’m surprised somebody hasn’t redubbed and repackaged this flick as another “Django and Sartana” movie.

KILL, DJANGO … KILL FIRST (1971) – Django is determined to collect the bounty on a gang of Mexican outlaws who repeatedly rob various banks scattered throughout Texas. Does he succeed? Of course he does. DISCLAIMER: No loved ones of Django are killed during this movie.

DJANGO, IF YOU WANT TO LIVE … SHOOT! (1971) – A wounded Django is nursed back to health by farming widow Sally McGowan … thus sealing her doom. A local land baron named Marlowe has his gunmen kill Sally and her young son, prompting the now- recovered Django to bring down the land baron and his thugs.

DJANGO … ADIOS! (1972) – AKA Death is Sweet from the Soldier of God. Django, working strictly pro bono this time, is out to bring down one of the slimiest and most sadistic villains in Spaghetti Westerns since Henry Fonda’s Frank in Once Upon A Time In The West. High body count and a very good movie.

THE BALLAD OF DJANGO (1973) – AKA The Django Story AKA Reach, You Bastard! Django bumps into Wild Bill Hickok, who turns out to be an unabashed fan of our melancholy hero. The movie then becomes a Django Clip Show as the bounty hunter regales Wild Bill with tales of his adventures, presented via flashbacks to past Django movies.

DJANGO’S GRAND RETURN (1975) – AKA Django Rides Again AKA Keoma. In his first post- Civil War adventure, Union veteran Django (Franco Nero again) returns to his hometown out west only to find it under a reign of terror by die-hard Confederate scumbags. The thugs are even preventing medical aid from getting in to deal with an outbreak of disease, making you really cheer for our hero as he blows away the nefarious Confederates.

DJANGO STRIKES AGAIN (1987) – Franco Nero stars as a Django who has spent the past ten years in a monastery trying to escape his violent past. His daughter gets kidnapped by an evil slaver who operates out of a riverboat that’s a virtual fortress. The outlaw slaver, named Orlowsky, plies rivers from the Rio Grande to the Amazon practicing his vile trade. When appeals to reason fail to secure his daughter’s release, Django once again takes up a six-gun, digs up his trusty Gatling Gun from a grave marked “Django” and returns to his violent ways one last time. This fun movie is equal parts Django film and Nate and Hayes swashbuckler.

48 responses to “DJANGO THEATER: A LOOK AT THE FILMS OF THE MOST DURABLE SPAGHETTI WESTERN GUNSLINGER”