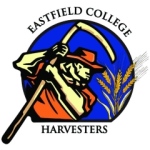 With the College World Series’ over now in all the divisions Balladeer’s Blog covers let’s offer a final round of congratulations to this year’s champions. In a way it was The Year of the Eagle since that nickname (one of the most monotonously overused in college sports) is sported by no less than three of the title winners. On the other end of the spectrum the Harvesters have the most unique nickname among this year’s winners so that’s why their logo is featured. Here are the World Series champions in the order in which I began covering their division.