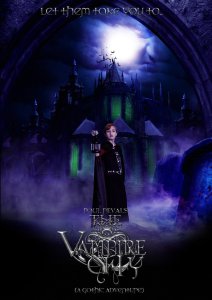 Halloween Month moved another notch today, leaving us with just 20 days left. Balladeer’s Blog continues its month-long celebration with a look at another neglected gem of horror fiction.

LA VILLE-VAMPIRE (City of Vampires) 1867 – Written by the accomplished and prolific Paul Feval, it’s Village of Vampires, or City of Vampires or, if you prefer, Vampire City (Wham, bam, thank you ma’am! Va- va- va- Vampire CIT-EEE! … Had to be said.)

Paul Feval’s heroine in this story is the young Ann Ward, who went on to be Ann Radcliffe, pioneer of Gothic Horror through such works as The Mysteries of Udolpho and The Italian. Ann’s friends Cornelia de Witt and Ned Barton depart for the continent with their new acquaintance Otto Goetzi.

Goetzi turns out to be a vampire who lures Cornelia and Ned deeper and deeper into a trap. Back in England, Ann Ward deduces all this from odd letters that she receives from her friends and from horrific premonitions which come to her in nightmares.

Ann and a much older family servant called Grey Jack cross the English Channel to come to the rescue of Ann’s friends. Soon the trail leads to Belgrade and then to a dismal city called Selene by outsiders but known as the Sepulchre to its inhabitants, all of whom are vampires.    END_OF_DOCUMENT_TOKEN_TO_BE_REPLACED

THE DEATHMASTER (1972) – In between his pair of movies as the vampire named Count Yorga the one and only Robert Quarry starred as a vampiric Charles Manson wannabe in this film. The Deathmaster starts out with a great bit that wouldn’t look out of place in a Jean Rollin horror flick from France: the huge, hulking Barbado (Le Sesne Hilton) plays eerie flute music, seemingly luring ashore a sea-tossed coffin. Naturally this casket holds our “Deathmaster” – a vampire called Khorda.

Unfortunately it’s all downhill from there unless you’re like me and you really enjoy bad movies. Khorda eschews the usual vampire shtick of being a suave ladies’ man. His approach is to dress like early 1970s hippies do and model his coiffure and facial hair after Charles Manson. The filmmakers even admitted that was indeed the look they were going for. END_OF_DOCUMENT_TOKEN_TO_BE_REPLACED

WYNONNA EARP: THE NEGLECTED HEROINE WHO DESERVES A MOVIE

Balladeer’s Blog’s Frontierado holiday is rapidly approaching! For newbies I’ll point out that that holiday is the 1st Friday of every August. I’m kicking off this year’s countdown to Frontierado with a look at a comic book heroine who should not be overlooked in this mad barrage of superhero films of the 21st Century. The fact that she falls into Weird Western territory is what makes her perfect for the Frontierado season.

WYNONNA EARP – December of 1996 saw the comic book debut of Wynonna Earp, a descendant of Frontier Marshal Wyatt Earp. Wynonna worked in present-day law enforcement in the American southwest. What separates her from her more well known ancestor is the fact that Wynonna was a United States Marshal, Black Badge Division.

The Black Badge Division was a top-secret branch of Federal Marshals established by President Theodore Roosevelt to deal with paranormal menaces. That’s right, Wynonna Earp was as sexy as Barb Wire or Xena and fought werewolves, mummies, zombies, gremlins and all other manner of supernatural foes just like Kolchak or the X-Files crew. In her earlier adventures Marshal Earp was drawn as a drop-dead sex-bomb who often gouged out the eyes of her opponents with her impossibly high heels while in her final few escapades she was drawn as a more sensibly-dressed heroine.

Wynonna Earp was the END_OF_DOCUMENT_TOKEN_TO_BE_REPLACED