THE PRISONER: THE SCHIZOID MAN

Balladeer’s Blog continues its examination of the 1967 science fiction/ existential drama The Prisoner. For Part One, in which I examined the themes and concepts at play in the series click HERE

Episode Title: THE SCHIZOID MAN … In the ongoing debate about the exact numbering of the 17 episodes of The Prisoner I place this as the 5th episode.

This episode’s Number Two – the rotating series of executives in charge of the Village – is portrayed by Anton Rodgers, whom regular readers of Balladeer’s Blog will remember from his role in the musical Scrooge (1970).

The Schizoid Man is especially beloved by all of us who value our individuality above nearly everything else. In this episode the nefarious Villagekeepers play their most effective mind game against Patrick McGoohan’s character The Prisoner. They seek to break him by robbing him of the very foundation of all his strengths: his identity and uniqueness. Or if you prefer, his sense of self.   END_OF_DOCUMENT_TOKEN_TO_BE_REPLACED

Balladeer’s Blog continues its examination of the 1967 science fiction/ existential drama The Prisoner. For Part One, in which I examined the themes and concepts at play in the series click HERE

Episode Title: CHECKMATE … In the ongoing debate about the exact numbering of the 17 episodes of The Prisoner I place this as the 4th in the series.

Peter Wyngarde portrays this episode’s Number Two, the rotating series of executive figures running the futuristic prison city called the Village. Balladeer’s Blog’s readers may remember him from my reviews of his shows Department S and Jason King. X-Men fans will recognize him as the obvious model used by Chris Claremont and John Byrne for Mastermind’s “Jason Wyngarde” persona in The Dark Phoenix Saga.

The episode begins with the Prisoner witnessing yet another sudden unleashing of “Rover” the bioelectrical synthetic creation which the Villagekeepers use to subdue outbreaks of disobedient behavior among the Villagers. As usual everyone freezes in their tracks, knowing Rover will attack anyone perceived as resisting.

For once, one of the residents shows no fear of Rover. An elderly man with a walking stick (George Coulouris from Citizen Kane) continues strolling along, ignoring Rover, who shows unprecedented deference to the man before moving on to subdue whichever Villager has raised the ire of the Villagekeepers.

Our protagonist is intrigued by this and follows the Man With A Walking Stick. The two share a casual conversation in which each man is wary of the other, given that nobody can ever be sure if a fellow Villager is secretly working for the conspirators behind the Village. 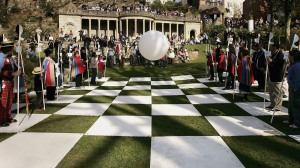 Walking Stick Man invites McGoohan’s character to a game of chess he is heading to. The Prisoner goes along and finds that the game is played with human chess pieces in one of the least subtle of the program’s metaphors.

Walking Stick Man is one of the two “players” who sit above the game shouting their moves through bullhorns. The Villagers serving as chess pieces move accordingly. END_OF_DOCUMENT_TOKEN_TO_BE_REPLACED 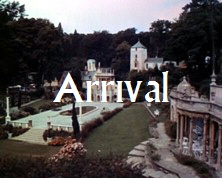 Fans of The Prisoner know that the exact order of the 17 episodes is up in the air since not even Patrick McGoohan, the show’s creator, star and prime creative force, was certain. However, there is no doubt that Arrival is the very first episode of the show (for obvious reasons).

The opening credits sequence is repeated for each episode (except for variations for Living in Harmony and for the very last episode, titled Fallout). That sequence presents our protagonist, the Prisoner (real name never revealed), disgustedly resigning from the Intelligence Service. Back at his home he is gassed into unconsciousness and awakens in an isolated, high-tech and dystopian prison-city that is called the Village.

The program’s nature as a Kafkaesque tale with science fiction trappings is established in this debut episode. The Prisoner is taken aback by the seemingly cheerful and storybook surface nature of the Village and the way that surface is at odds with the underlying air of fear and paranoia. 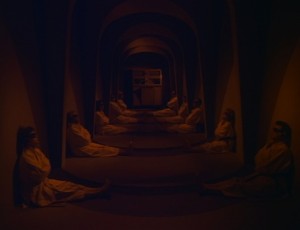 All inhabitants/ captives of the Village are either former Intelligence Operatives like himself, or scientists or figures from the government or military. And from all around the world, too, not just the West.

In the Cold War attitude of the time the Prisoner is obsessed with finding out “which side” the Villagekeepers are on, but as the series progresses it becomes clear that the Free World vs Communist World paradigm is merely part of the deception being played on the Village’s prisoners. And possibly the world at large, intriguingly enough.    END_OF_DOCUMENT_TOKEN_TO_BE_REPLACED