PULP HERO THE NYCTALOPE: MORE BLOG POSTS WILL BE COMING 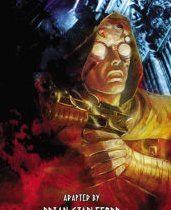 Balladeer’s Blog’s posts about neglected Pulp Heroes like the Nyctalope, G-8 and His Battle Aces and others have proven enduringly popular over the years. My work on the then-obscure Moon Man from the 1930s caught the eye of author Greg Hatcher, who was kind enough to thank me for my synopses of all 38 original Moon Man stories AND to send me a copy of his story in the 2014 collection of new Moon Man (and other hero) tales by modern authors.

Since I’m as vain as the next guy I’ll even thank Mr Hatcher again for his kind November 2013 note that read in part: “I was writing to thank you for your invaluable index (Of Moon Man stories). I literally couldn’t have done it without your scholarship to fall back on … I thought the least I could do was let you have mine in advance as a thank-you, and also let you see the afterword where you and your blog are acknowledged.”

Anyway, writing a blog isn’t JUST about getting death-threats and such. You sometimes hear from very kind-hearted people like Greg Hatcher. 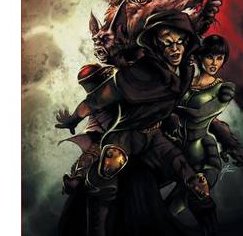 This brings us back to the Nyctalope, the neglected bionic French Pulp Hero created in the VERY early 20th century by France’s sci fi icon Jean de la Hire. My review of some of the Nyctalope novels in the original French predated a couple of the recently published English language translations and assorted readers were wondering when I would finish the whole series, like I did with G-8, Silver John and Northwest Smith.

Rest assured my reviews of The Moroccan Sphinx, The Amazons of Everest, Voyage of the Nyctalope, The Nude Sorceress, Assassination of the Nyctalope and The Mysterious Skeleton are forthcoming … Just like my completion of the Son of the Black Mass samurai films & novels, The Flashman Papers and other items. Hopefully we’ll all still be alive by then.

THE CROSS OF BLOOD LOCATED 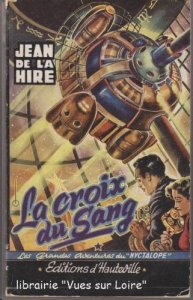 Thank you to all the Balladeer’s Blog readers who let me know where to lay my hands on a French copy of The Cross of Blood (1941), one of the Nyctalope novels I had not yet been able to track down.

I have ordered it and will post a review after I get a chance to read it.

Balladeer’s Blog examines another Pulp Hero who doesn’t get as much love as he deserves. Science Fiction pioneer Jean de la Hire from France created the Nyctalope (“Nightwalker”) in 1908 but since many of de la Hire’s works were not translated into English for decades this fascinating cyborg Pulp Hero and proto-superhero languished in obscurity.

This French figure survived a violent incident with the help of scientists who “had the technology” to give him yellow bionic eyes which could see in the dark and for long distances. In addition his saviors replaced his damaged heart with a cybernetic one, endowing him with superhuman stamina since that artificial organ slowed the buildup of lactic acid in his system.

The Nyctalope’s serialized adventures were collected into novel form after each story ended. 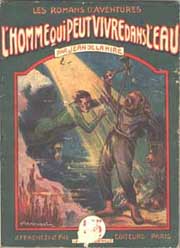 THE MAN WHO COULD LIVE UNDERWATER (1908) In the story which introduced the Nyctalope he was a supporting character to one of Jean de la Hire’s other fictional figures, in this case Charles Severac. That man invented and captained the Torpedo, a super-scientific submarine that would make Captain Nemo AND Mighty Jack green with envy.

The Nyctalope helped Severac battle a mad scientist named Oxus and his associates Fulbert the monk and Balsan the surgeon. The villains had created a hybrid shark-man called the Ichtaner, meant to be the start of an amphibious army. Needless to say our heroes emerged triumphant and the Ichtaner was returned to normal.

In this debut appearance the Nyctalope’s secret identity was given as Jean de Sainte Clair, but de la Hire would absent-mindedly alternate between that and Leo Saint-Clair in future adventures before finally settling on the latter name.

(NOTE: Various fan-created histories of the Nyctalope resolve the difference by claiming that Jean de Sainte Clair was the father of Leo Saint-Clair. As fun as those fan works are they are not always official.) 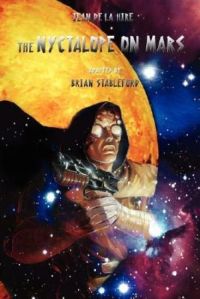 THE MYSTERY OF THE FIFTEEN (1911) aka THE NYCTALOPE ON MARS – Oxus the Mad returned as a villain in this first solo adventure of the Nyctalope. Oxus (renamed Arkhus in some later translations) was a member of a group called The Fifteen – a secret organization of megalomaniacal madmen.

The Fifteen had formed an alliance with a race on Mars, and through that alliance they had access to interplanetary spacecraft and additional advanced technology. Oxus, Koynos and their co-conspirators were spiriting women away to the Red Planet to marry some of them. They were planning to use the rest on a project cross-breeding Martians and humans to create perfect beings and an unstoppable warrior race in order to conquer both worlds. END_OF_DOCUMENT_TOKEN_TO_BE_REPLACED