THE STEAM MAN OF THE PRAIRIES (1868): ANCIENT SCIENCE FICTION 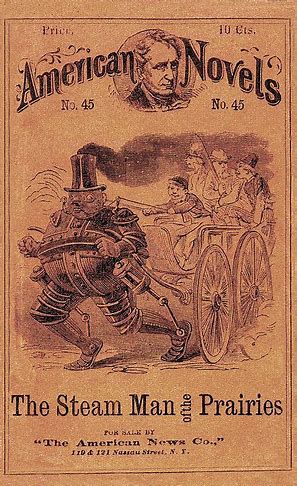 THE STEAM MAN OF THE PRAIRIES (1868) – Written by Edward Sylvester Ellis. Before the Frank Reade stories came this work that is often hailed as the first Dime Novel with a science fiction theme.

Ellis seems to have been inspired by the REAL and well-known Newark Steam Man built by Zadoc P Dederick in January of 1868. That Steam Man was built strictly to pull carts and wagonloads up and down the street. Its human appearance was just a novelty.

Back to Ellis’ novel: In Saint Louis lives Johnny Brainerd, a 15 year old dwarf with a hunchback, who has a brilliant mind in his misshapen body. After a long line of somewhat modest inventions Johnny constructs a human-shaped Steam Man that stands 9 feet tall. It has long legs with spiked feet, has the boilers in its chest, the firepot in its stomach and lets excess steam vent from its hat. (Dederick’s Newark Steam Man also wore a top hat.) The creation’s nose serves as its whistle, like on a tea kettle.      END_OF_DOCUMENT_TOKEN_TO_BE_REPLACED