THE OBAMA/NIXON PARALLELS KEEP PILING UP! 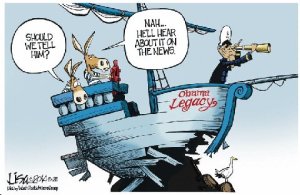 The weak, inept and crooked little man named Barack Obama continues to slither even lower than his fellow reptile Richard Nixon did. Nixon could only muster an eighteen and a half minute gap regarding likely incriminating evidence but Little Barry Obama has left history with a TWO YEAR GAP of e-mails regarding the IRS/ Lois Lerner scandal (which itself is just one of dozens of criminal scandals hovering around the administration of this repulsive little slug from the cesspool of Chicago politics).

As various IT professionals are stating it is inconceivable for all of the emails between an IRS chief and the White House to simply disappear because of computer problems like the administration is lying abou – um, I mean claiming. A reasonable person might conclude that this is another example of the corruption at the core of the Obama Administration … and might wonder what bombshells are still to come. END_OF_DOCUMENT_TOKEN_TO_BE_REPLACED