GUESS THE RELIGION: A BEHEADING FOLLOWED BY A BIG EXPLOSION

Well, of COURSE it’s Islam! Only simple-minded fools or political robots would pretend that it would be otherwise at this particular point in history! Today in France at least 2 Muslims beheaded a victim, scrawled Arabic writing on the head and then rammed a gas business with a car, causing an explosion and multiple injuries. The attackers carried the flag of the Islamic State, the patriarchal, homophobic theocracy spawned by Barack Obama’s premature withdrawal from Iraq.

In a related story much was made of the recent survey in which 25 % – yes, ONE FOURTH – of American Muslims said they support the use of force against non-Muslims who don’t live according to Muslim prohibitions. Personally I think that’s much less of a deal than the fact that nearly ONE HUNDRED PERCENT of American Liberals support such use of force. After all, American Liberals are mindless, unquestioning foot-soldiers of the Democratic Party and the Democratic Party wants the Muslim vote, therefore, the rest of us are acceptable losses in the pursuit of that voting bloc.

American Liberals are the Kapos of the world, happily performing administrative tasks for the intolerant fanatics of Islam hoping that the rest of us will get killed or otherwise victimized before they do. And let’s face it, Muslim fanatics are the ONLY Muslims who are of use to Liberals. Muslims who are peaceful and capable of coexistence don’t help the Democratic Party in ginning up hostility between Muslims and Non-Muslims. END_OF_DOCUMENT_TOKEN_TO_BE_REPLACED

AS ALWAYS, IT’S THE PEOPLE WITH THE CRESCENT WHO CANNOT COEXIST WITH THE REST OF THE WORLD.

The Religion of Blowing People to Pieces once again rears its ugly head! Islam is the most homophobic, misogynistic and otherwise intolerant religion in the world at this particular point in history.

Muslim Munther Omar Saleh and an accomplice were arrested for plotting a bombing attack in New York City to support the Islamic State, the savage theocracy spawned by Barack Obama’s premature withdrawal from Iraq.

In various social media Saleh had praised various Muslim terrorist attacks (there are ALWAYS plenty around the world every single day, after all), praised the Islamic State’s violent methods, praised the Charlie Hebdo killers and expressed concern that “AQ (Al Qaeda) could be getting too moderate.” (Yes, really.)  END_OF_DOCUMENT_TOKEN_TO_BE_REPLACED

ISLAMIC STATE TERRORIST ARRESTS MADE IN SAN DIEGO AND MINNEAPOLIS

Nancy Pelosi, the poster child for having way too much plastic surgery, thinks the U.S. should withdraw from San Diego and Minneapolis.

Six male Muslims were arrested in San Diego and Minneapolis in anti-terrorist raids on Sunday. The men were seized for attempting to aid the Islamic Republic, which was spawned by Barack Obama’s premature withdrawal from Iraq.

Nancy Pelosi and other Democrats immediately came forward and said “This proves America needs to withdraw from San Diego and Minneapolis. The longer we stay there we are just driving more and more Muslims into the arms of the Islamofascists. No more blood for oil! We MUST withdraw! If we weren’t in San Diego or Minneapolis those Muslims would not hate us. It is the policy of the Democratic Party that the United States will NEVER win another armed conflict ever again. Oh, and by the way WE’RE the real terrorists.”

The decrepit 1960’s generation of American Liberals expressed agreement. A spokesperson for that vain and self-centered generation said “We don’t know anything about history except the Vietnam War. Withdrawing from Vietnam seemed to end that conflict so our solution to EVERY war for the rest of eternity will always be ‘Withdraw, withdraw, withdraw!’ The only reason America is in San Diego and Minneapolis is because of imperialism and racism. Therefore, our generation will ALWAYS support the Muslim freedom fighters who want America out of San Diego and Minneapolis. Did I mention we protested the Vietnam War?” END_OF_DOCUMENT_TOKEN_TO_BE_REPLACED

THE MUSLIM SACRAMENT OF BEHEADING.

The Islamic State, spawned by Barack Obama’s premature withdrawal from Iraq, continues to terrorize more and more countries. The Muslim fanatics engaged in the mass beheading of at least 30 Christians in Ethiopia after raiding their churches and destroying their objects of worship.

As usual with Muslim savages they were very, very proud of their handiwork and released a video of the event, promising to kill all Christians who cross their path. What else would you expect from a religion founded by an insane child rapist? I contacted Muhammad for a comment on all this and he replied “Islam’s ambition is to be to the 21st Century what the Nazis were to the 20th. Those gutless hypocrites called American Liberals are our biggest supporters and they enable every one of the deaths we inflict! What irony!”     END_OF_DOCUMENT_TOKEN_TO_BE_REPLACED 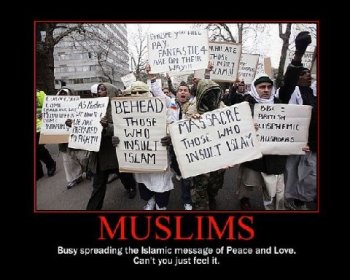 The Religion of Blowing People to Pieces strikes again! Yes, it’s the homophobic, misogynistic and otherwise intolerant pack of superstitions called Islam. Muhammad Abdullah Hassan (formerly John T Booker, Jr) was charged with attempting to use a 1,000 pound bomb in a terror attack on Fort Riley in Kansas.

“Getting ready to be killed in a Jihad is a HUGE adrenalin rush” the murderous Muslim moron had quipped online according to CNN. Luckily this particular madman’s plot was thwarted. (My condolences for that go out to American Liberals, especially 1960’s Liberals, who feel that any dead victims of Muslim violence had it coming.)

As always let me point out that here at Balladeer’s Blog I trash ALL religions but you’d have to be a gutless hypocrite to pretend that Islam is not the most uncivilized, intolerant and violent religion in the world at this particular point in history.   END_OF_DOCUMENT_TOKEN_TO_BE_REPLACED