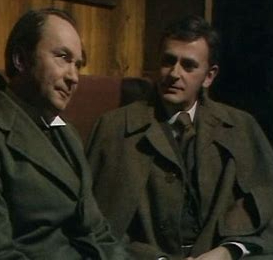 Comment: This will complete my look at this neglected television series. My reviews of The Rivals of Sherlock Holmes began with the Season One episode featuring Doctor Thorndyke played by John Neville, so it’s kind of appropriate to end with a review of this Season Two episode starring Barrie Ingham as Thorndyke.

Review: At a public London procession in honor of a Russian Grand Duke a man suspected of being an anarchist is accidentally killed while running from police. Our medical man Doctor Thorndyke arrives on the scene with his sidekick Doctor Jervis (Peter Sallis) just as the authorities are cordoning off the area over fears of an anarchist bombing.

The dead man is found to have no bomb or other weapons, just a mysterious note in an ancient language which Thorndyke recognizes as Moabite. This raises the possibility that a larger anarchist plot is in the works, possibly even the assassination of the visiting Russian.

With press vultures sensationalizing the incident and with fears for the safety of the Grand Duke overwhelming Scotland Yard, our hero’s old friend Inspector Miller shows up to bring the good doctor deeper into the investigation.

A further demand is made upon Thorndyke’s time by Alfred Barton (Julian Glover), who is convinced his brother’s young bride is poisoning her husband’s meals with arsenic. END_OF_DOCUMENT_TOKEN_TO_BE_REPLACED