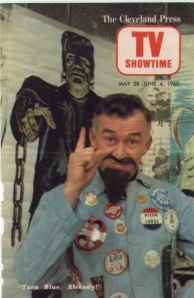 From January of 1963 to December of 1966 Ernie Anderson, AKA Ghoulardi, ruled the  Friday night airwaves in Cleveland with his b-movie show. To give you an idea of how popular his show was, Ghoulardi did what some of the top entertainers of their day consistently failed to do – HE BEAT JOHNNY CARSON’S TONIGHT SHOW IN THE RATINGS! Carson may have owned the rest of the country, but on Friday nights in Cleveland and vicinity Ghoulardi was the REAL king.

Ghoulardi, along with Vampira and Zacherley, is part of the Holy Trinity (or Trimurti if you prefer) of the early b-movie show hosts who proved so popular they ensured that the American folk art of hosting Grade Z films would not be just a passing fad. Those three pioneers (if you’re from Chicago you can add Mad Marvin) became pop culture icons and helped demonstrate how much fun bad movie culture can be.

In Ghoulardi’s case his catch-phrases like “Stay sick” and  “Ova dey!” were the “Hikeeba!” of their day. Anderson’s look was iconic, too, and his green lab coat predated Doctor Madblood’s and Trace END_OF_DOCUMENT_TOKEN_TO_BE_REPLACED 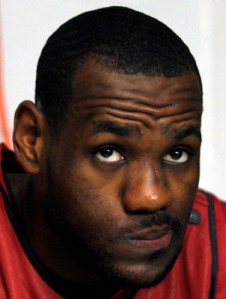 LeBron James’ desperate attempt to finally win something by getting Dwyane Wade (Dwyane is how he spells it) to carry him on his shoulders has so far resulted in a lot of well-deserved ridicule and a very unimpressive 9-8 record. Since I have as many NBA Championship rings as LeBron does I figured we could talk as equals on the current events in his career.

Official Balladeer’s Blog Nickname: The Lord Of No Rings

What should opponents fear the most from you?  The fact that they might stumble and fall on the court because they’re so busy laughing at the way I made such an ass of myself with that whole “The Decision” special and the END_OF_DOCUMENT_TOKEN_TO_BE_REPLACED