ALL LIVES MATTER: JUST DEAL WITH IT 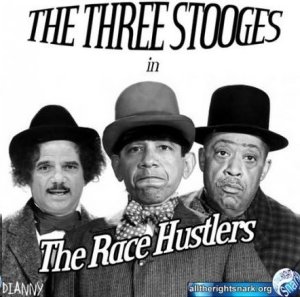 Barack Obama, Al Sharpton, Louis Farrakhan and other “racists of color” have been emboldened by the gutlessness of politicians like Martin O’Malley. Those spineless wimps immediately apologized when Rednecks of Color like Obama, Sharpton and others took exception to people replying to the bigoted slogan “Black Lives Matter” by saying “All Lives Matter.”

Politicians are all on the cowardly (and sleazy) side, so they thought they were completely safe making the common sense statement that All Lives Matter. The brainless black bigots who PRETEND to speak for all black people in the U.S. have lambasted O’Malley, Hillary Clinton and anyone else who dares to imply that it’s not just black lives that matter. Clinton cravenly apologized just like O’Malley did for this latest form of political blasphemy.

Yes, overseas readers – America has officially become SO screwed up that it’s now considered “dangerous” or “offensive” to say that All Lives Matter. So, to all the Black Klansmen who get upset by it, I’m happy to say “ALL LIVES MATTER!” And furthermore:  END_OF_DOCUMENT_TOKEN_TO_BE_REPLACED