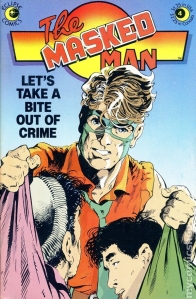 Superheroes continue to dominate pop culture. And not just on the printed page, but on the big and small screens as well. Readers of Balladeer’s Blog are always quick to ask for more superhero entries whenever I go too long without one.

Most recently I finished up my examination of the Killraven stories at Marvel Comics. Prior to that I had looked at the Celestial Madonna Saga, the Kree-Skrull War, Panther’s Rage and the original Magus storyline with Adam Warlock. From DC Comics I reviewed the World War Two-era Justice Society stories.

This time around I’ll do a story-by-story examination of B.C. Boyer’s neglected superhero called the Masked Man. Boyer wrote AND drew the character at Eclipse Comics in the 1980s. Back then Eclipse represented the kind of bold and visionary storytelling that comic book readers of today look for with artistic mavericks like Ethan Van Sciver, Richard C Meyer, Jon Malin and others. 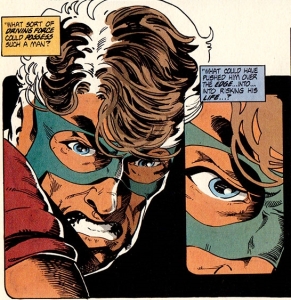 Just as Van Sciver, Meyer and Malin (NOT a law firm) blaze new creative trails today, Eclipse Comics did decades ago, supporting both established names AND new talent, all producing work that the Big Two publishers would have been too corporate-minded to publish.

All of which brings us back to the Masked Man aka Dick Carstairs. This creation of B.C. Boyer, who also illustrated and wrote all the character’s adventures, debuted in Eclipse Magazine in November of 1982. END_OF_DOCUMENT_TOKEN_TO_BE_REPLACED