WHAT KIND OF SAVAGES TORTURE CHILDREN FOR NOT PRAYING?

Oh, yeah … Muslim savages. The Islamic State tortured two 9 year old boys for playing outside a mosque instead of entering  it to pray. Yes, Muslims are now so out of touch with reality that children playing offends their mindless superstitions. The Islamic State no doubt sends out another “thank you” to Barack Obama for his premature withdrawal from Iraq, allowing them to take over.

What kind of savages shoot people in the surf so that they can laugh at their dying struggles to stay upright to avoid drowning even though they’re doomed anyway from their gunshot wounds? And then PROUDLY POST VIDEOS ONLINE SHOWING THEMSELVES COMMITTING THIS ATROCITY?

What kind of savages storm a university in military gear, separate their co-religionists from the rest of the students (Talk about “othering”!) and then kill those other students? END_OF_DOCUMENT_TOKEN_TO_BE_REPLACED 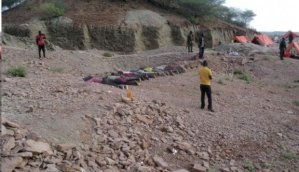 NORTHEAST KENYA – Islam, the religion of rape aka the religion of blowing people to pieces, once again demonstrates that not only is it the most misogynistic and homophobic faith in the world at this particular point in history, it’s also the most savagely violent. This particular gang of Muslim murderers goes by the name “al Shabaab” but I always lump these groups under an umbrella organization I call I.S.L.A.M. – Intolerant Savages Loathing All Modernity.

Just over a week ago this same Muslim group butchered 28 passengers in a bus they hijacked in northeast Kenya. A quarry in that same region was the site of this new assault. The al Shabaab members took time out from oppressing women and otherwise retarding the rest of the world’s social progress to separate the Muslim quarry workers from the non-Muslims, then callously killed all 36 non-Muslims.   END_OF_DOCUMENT_TOKEN_TO_BE_REPLACED