Balladeer’s Blog takes another look at a Pony Express Rider for a seasonal post now that the Frontierado Holiday is fast approaching. (It falls on August 5th this year.) Frontierado is about the myth of the old west, not the grinding reality.

BOSTON – Warren Fremont Upson, better known by his one-word nickname, was one of the Pony Express Riders aka Expressmen to ride with the service for its entire existence from April 3rd, 1860 to October 26th, 1861. His real name was so seldom used in the old west that in some sources on Pony Express history he was listed only as “Boston.”

Warren was born in 1841 in Marion, AL and moved with his family to Sacramento, CA in 1851 when his father Lauren Upson became the editor of the Sacramento Union newspaper. Though the elder Upson spent his career in the publishing field, Warren was too rambunctious and preferred the great outdoors.

Already experienced at hunting and camping, W.F. Upson learned polished horsemanship skills from the local vaqueros. Legend has it that these Sacramento vaqueros nicknamed him “Boston” because it was the eastern city they were most familiar with, and they had not yet met anyone else who had Warren’s southeastern accent. So, Boston it was, despite the geographical inaccuracy.

Our hero spent most of his time riding and exploring in the Sierra Nevadas, hunting and cooking his own food and acquiring a familiarity with the mountain range’s often-treacherous curves and turns and sudden drops. That familiarity would pay dividends later in life when Boston was assigned to the most geographically dangerous route of the Pony Express.

In February of 1860, Upson responded to one of the Express’ famous job advertisements asking for unattached men who would not leave behind a wife and children if they were killed while carrying out their duties. (“Orphans Preferred” was just one of the variations on that theme.)

Not only was Boston hired, but the young man’s already celebrated mountain man skills and marksmanship got him the perilous route from Sportsman’s Hall in what is now Pollock Pines, CA to Genoa, UT and/ or Friday’s Station near Lake Tahoe. 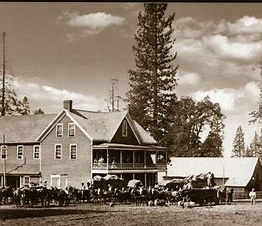 Warren’s very first ride was a virtual template of the kind of conditions he would face for much of 1860 and 1861. On that day in early April when the Pony Express launched, Boston waited at Sportsman’s Hall for Expressman Sam Hamilton to show up and hand off the mochila (mail packet).

At that altitude in the Sierra Nevadas heavy snow fell even through the end of April and that day was no exception. Most Expressmen selected their horses according to speed and endurance, but Boston based his selections on surefootedness.

Snow, sleet or rain often made the rocky surfaces of the mountain range so slippery that less certain mounts might easily slide over the side of the narrow trails and down several hundred feet. And that was even with Warren dismounting and walking his horses through those perilous trails.

On that very first ride, Boston was able to travel without incident to the south rim of the American River Gorge, then dismounted and led his horse on foot down the sleet-slickened incline toward the river itself. Upson remounted and rode his horse across the American River, soaking himself to the armpits but holding the mochila over his head to keep it dry.

Both he and his mount found warmth from a campfire maintained by a fellow Express employee on the other side. Boston also switched into dry clothing provided by his colleague and rode off on a fresh horse.

In a typical April blizzard, Warren and his new mount fought their way up the mountains to the Pony Express Station called Hope Valley. That valley got its name from travelers headed west because once they had reached that point the worst was behind them and it was largely downhill to California. Boston, however, was headed east, meaning the worst was ahead of him.

Above Hope Valley the trail narrowed, the drop-off to the river below was nearly straight down and the way ahead often rose steeply. Snowdrifts deepened and weighted-down saplings often blocked the path.

Boston negotiated his way around such obstacles thanks to his familiarity with the terrain. It was said that Boston and Native Americans were the only human beings to have ever ridden some of the pathways he and his horse followed.

On the headlands of the Sierras, winds were so strong they often threatened to blow Warren and his mount off the narrow trail to plummet to their deaths far below. Next came more deep drifts as Boston approached the next Pony Express Station.

The Station Master told Upson that a mule driver named Yancy was supposed to be leading his team back and forth across the trails to try to keep them open from the drifting snow but conditions were so bad that he and his mule team hadn’t been able to make it to the station.

The station-man tried to talk Boston into waiting until the mule team arrived or the storm broke, but time was always of the essence with the Pony Express and the young man mounted a fresh horse and rode on.

Near the point called Strawberry, the Expressman encountered Yancy and his mule team, struggling through the high drifts. Yancy later recounted how he had encouraged Boston to sit out the storm with him, his mules and his jerky but Warren replied “This is nothing! You should see a January howler up here!” and rode off.

Boston did not emerge from under the punishing snowstorm until he was nearly at Friday’s Station, where he at last turned the mochila over to the next Pony Express Rider. Ten or so days later, Upson would be handed the mochila from the latest west-bound Expressman and retrace his route, ultimately handing off his valuable cargo to another rider at Sportsman’s Hall.

And so it went, in all weather. Warmer weather might usher out snowstorms, but rains and gale-force winds remained a danger all year-round. Boston persevered through it all, earning his place in Pony Express history.

Among the important news stories that Warren delivered back to California during his career were items about Abraham Lincoln’s inauguration in March of 1861 (January inaugurations did not start until the FDR era) and the firing on Fort Sumter which kicked off the Civil War that April. Boston also took part in the fastest-ever run of mail delivery of 7 days and 17 hours.

When the Express went under in late October of 1861, Warren Fremont Upson found himself desiring new types of adventures. He traveled to Alaska and explored for a while before signing on with whaling ships for a few years. Later, he traveled to Panama in search of new challenges before ultimately returning to California.

The man called Boston died from natural causes fairly young, at age 55. He passed away in February of 1896 and was buried in Sacramento City Cemetery.

P.S. Sportsman’s Hall, which was established in 1852, is still a restaurant and is maintained as a historical landmark.