DUSTY’S TRAIL (1973-1974) – Just sit right back and you’ll hear a tale, a tale of a fateful trip … But not THAT one. Dusty’s Trail was an uninspired, unfunny attempt by Sherwood Schwartz to recapture the success of his famed sitcom Gilligan’s Island.

Demonstrating “Minimum Effort Puppy” levels of laziness, Schwartz shamelessly copied every single aspect of Gilligan’s Island and its memorable – if moronic – characters over to the Old West. With Dusty’s Trail, Schwartz managed to cadge everything but the laughs from his 1960s hit. 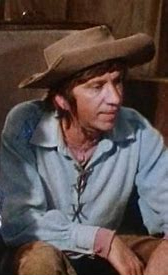 On both shows the imbecile whose repeated blunders doomed his party’s efforts to save themselves over and over again was played by Bob Denver. In real life the other stranded people would have killed Gilligan or Dusty very early on, but these were just sitcoms, so both mentally impaired losers were permitted to live. 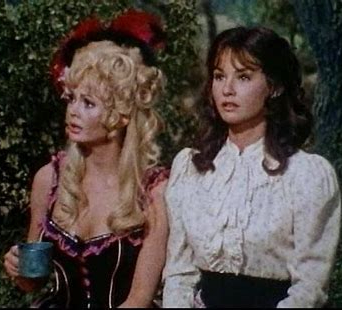 With the seventh recurring character the 1970s program got wildly experimental. While Gilligan’s Island had the Professor, played by handsome Russell Johnson, Dusty’s Trail had Andy, played by the nondescript Bill Cort.

The Professor brought all kinds of talents and abilities to the table and proved crucial to the survival of the castaways on Gilligan’s Island. Andy had no fixed profession or skills or personality, but proved crucial to making sure that Dusty’s Trail had seven central characters, just like the show it shamelessly imitated.

In one episode it seems like Andy might be a lawyer, but nope. He mostly is just “a normal guy” and is neither funny nor attractive. The character could have been made some other western stereotype or left out completely, but Sherwood Schwartz and company were clearly on cruise control here. The original show had seven characters so dammit THIS show had to have seven characters.

Anyway, to me Bill Cort will always be Howard Howard from Breakin’ 2: Electric Boogaloo. But I’m kind of weird.

Both Gilligan’s Island and Dusty’s Trail featured laugh tracks, but with the 1970s show there is a complication. Four episodes of Dusty’s Trail were edited together and released in movie form as The Wackiest Wagon Train in the West in 1976. The laugh track was removed from those four episodes for the film, but it’s easy to see where the episode breaks should be.

Some Youtubers have uploaded the segments of the movie as separate episodes, and the lack of a laugh track led to arguments between fans insisting the original show had a laugh track and fans who pointed to the edited YT segments as “proof” that it did not have a laugh track. Hey, it wasn’t a “Ginger vs Mary Ann” level of conflict, but it showed there were people actually interested enough in Dusty’s Trail to argue about it.

The episodes of this western spoof featured the broadest stereotypes of Native Americans, outlaws, etc but the overall effect was like trying to do 1950s or early 1960s sitcom material in 1973. You groan and roll your eyes with disgust at how predictable or just plain lame the jokes are.

And just like the castaways on Gilligan’s Island should have been rescued dozens of times over, the lost pioneers on Dusty’s Trail should have gotten back on course several times. Over and over again, the seven wagon train figures captured outlaws and TURNED THEM OVER TO THE SHERIFFS OF NEARBY TOWNS, yet apparently no one was able to give them directions.

Or hell, at certain towns you’d think the pampered, complaining Brookhavens would have stayed behind in order to go back home or sign on with another wagon train.

But forget about anything making sense while you watch episodes of this show. You might find yourself exasperatedly saying things like “But … but … you were just using a telegraph wire … ASK FOR HELP!” or “But … but … the millionaire was just using a rifle to hunt pheasants, so you’re NOT out of weapons to use against the outlaws.”

Observations like that do nobody any good. If you’re unfortunate enough or masochistic enough to watch Dusty’s Trail just put your mind on hold and take in the outdated, childish simple-mindedness of it all. And to tell the truth, little kids might like the show for what it is. +++