Halloween Month continues here at Balladeer’s Blog! Here’s a look at some of the neglected monsters I’ve covered over the years. These horrific figures deserve as much love as the better known characters like Dracula, Frankenstein, the Crying Woman and many others.

Lore: Around the year 800 AD an Aztec scholar named Sethos drank the Draught of the Everlasting Covenant and went into a state of suspended animation. In 1879 mining operations uncovered the tomb where he was hidden away.

A scientist of the era mastered the technique of reviving Sethos and successfully restored him to full life. Sethos’ body was hideously mummified but intact except for a gaping hole in his skull in the middle of his forehead from the experiment to revive him.

The long centuries of suspended animation awakened powerful psychic powers in the ancient Aztec figure. He used those powers to mesmerize everyone he came in contact with. They were the first followers in Sethos’ plan to revive the worship of the Aztec gods, using industrial age technology to accomodate the large-scale blood sacrifices those gods demanded.

Lore: Helen was the resulting offspring from the rape of her mother – a prostitute known only as Mary – by the ancient Greek deity Pan. This rape was enabled by the devious Dr Raymond, who modified Mary’s brain to permit her to see the extra-dimensional god.

Think of Helen as a forerunner of Damien from The Omen. Even as a child she began preying on her playmates if they angered her in any way. She had supernatural strength, was immune to all but one form of death and her sex appeal enthralled every man she interacted with. As a teenager Helen would seduce those men into a life of debauchery and unholy rituals before draining away their money and leaving them as quivering shells of men.

Helen seduced men in higher and higher international circles and may have been attempting to provoke a war between the world’s great powers like her ancient namesake. Aware that she was being hunted by Misters Clarke, Villiers and Austin the she-devil began having her discarded lovers commit suicide to prevent her pursuers from questioning them.

Lore: The King in Yellow was the sinister being who ruled over an extra-dimensional realm. Insane people and creative artists in all fields were susceptible to his influence. One of those creative figures wrote a play titled The King in Yellow, unleashing the King’s powers on an unsuspecting world.

Everyone who read The King in Yellow went insane and/or committed suicide to the point where all nations outlawed the book and all religions condemned it. Some creative artists were demonically inspired to vile works by the play, like creating chemical baths to transform people into statues or painting portraits of the King’s sinister minions, allowing those minions to enter our world through those portraits.

Some of those servitors of the King in Yellow were an assassin capable of assuming feline form, an undead hearse driver, a sinister organist whose touch transported people to the King’s dimension and the Restorer of Reputations, a hideous schemer whose ears and fingers had fallen off.

SPOILER: The dimension ruled over by the King in Yellow turned out to be the site where human souls go when they die. Horrifically enough it turned out there was no God or Satan and no Heaven or Hell – after death no matter how “good” or “evil” you were in life your soul would be tormented forever in the King’s realm. There was no escape. 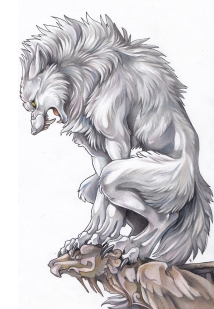 Picture by Exileden at Deviant Art.

Lore: White Fell was a female werewolf who preyed on people and livestock in 1890s Denmark. She would transform into a werewolf every night at Midnight and in that form would possess all the supernatural senses and enhanced strength of a human-sized wolf.

White Fell was not above preying on children and the elderly to feed her appetite. In her human form she was incredibly beautiful and used that to her advantage by pitting potential foes against each other or by seeming too divinely feminine to be a ruthless killer.

Lore: Kahlbranner was a one-time mortal sea captain condemned to rule over the Maelstrom off the coast of Norway near Bergen and Stavenger. That sentence would hold until he could find someone willing to give their first-born daughter to his monstrous son as a wife.

Kahlbranner’s leverage in potential deals was the incredible wealth that he had access to on the sea bottom. That wealth lay in the treasures and other cargo carried by all the ships that the Maelstrom had swallowed over the years.

Kahlbranner’s supernatural ship could sail above or below the waves and needed no wind to travel. His crew were all humanoids who looked exactly like him and silently obeyed his every command.

Lore: At the foot of the French mountain known as La Malroche was the home of a witch called La Bonne Femme (“The Good Woman”) not because she was truly good but because the citizens of the nearby town of Escures feared to anger her by using a less agreeable name.

When she pleased La Bonne Femme would toy with the townspeople. They had no choice but to endure her hostility because no doctors would stay for long in the desolate area so the witch was often needed for her cures and potions.

While serving as a midwife for a woman from a family openly scornful of La Bonne Femme the witch cursed the subsequent child. The infant grew extraordinarily fast, possessed incredible strength and could go for days without sleep.

Ultimately the cursed offspring’s metamorphosis was complete and he took his place as one of the huge human-headed dog creatures that La Bonne Femme kept chained in a pack. The witch would often prey on the countryside at night by leading this pack of monstrous hybrids on destructive jaunts.