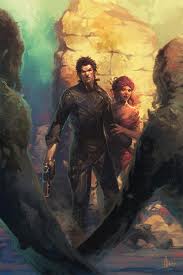 Balladeer’s Blog concludes its examination of another neglected pulp hero – in this case Northwest Smith. Created by the female author C.L. Moore in the 1930s Northwest Smith was a ruthless outer-space smuggler and mercenary decades before Han Solo. With his Venusian partner Yarol at his side and armed with a trusty blaster Smith roamed our solar system in his deceptively fast spaceship The Maid. For more on Northwest Smith and other neglected pulp heroes click here: https://glitternight.com/pulp-heroes/

13. SONG IN A MINOR KEY – For this farewell vignette featuring Northwest Smith we get an oddly touching piece that enhances Smith’s character without ruining the mystery. He and Yarol are back on Earth to visit the spot where Northwest committed his first crime exactly 20 years earlier, setting his life on its present course.

He reveals that Northwest Smith is not his real name (Well, duh! I always figured his real name was Northwest Rabinowitz.) and is uncharacteristically serious- minded as he soaks in the atmosphere of the woodland area where his fate was determined so long ago.

Our melancholy outlaw ruefully ponders his life that might have been and the woman he might have shared that life with. He contemplates the home they might have had together and more as we get tantalizing glimpses into Smith’s past here in this place … where he killed his first man.

Wisely, C.L. Moore sticks to her method of never quite establishing the nature of the governments of the various planets in Earth’s solar system and lets her readers fill in the gaps themselves as to whether the worlds of Smith’s time are merely flawed democracies with active criminal elements or totalitarian regimes with laws so strict they just DARE you to break them.

Northwest is in danger every minute he spends on Earth we’re told (though that didn’t prevent him from partying in New York City in Lost Paradise or that city in the American west at the beginning of Werewoman) and we get a look at how homesick our antihero is every time he spots the far-off Earth in the nighttime skies of the other planets his adventures take him to.

We’re also made aware of the friction between himself and another figure in the mysterious woman’s life but, again, brilliantly (in my opinion, anyway – some fans don’t like it) Moore doesn’t let on if that figure was a romantic rival or instead a father or brother of his lost love. It IS made clear this powerful figure disapproved of Smith’s relationship with the woman and as the conflict escalated Northwest shot him down with a blaster right on this unlikely location two decades ago.

In another wonderful touch Northwest Smith has enough self- awareness to realize that given his nature and the societal circumstances of his homeworld at the time it was inevitable that he would have become an outlaw. He was already straining at the restraints placed on a man in his era like a caged lion straining against the bars of his cage. He philosophically muses that even if he had it all to do over again, he – being the man he is – still would have pulled the trigger. Even more importantly he realizes that even if he did not kill that particular man on that particular day he inevitably would have transgressed in some other way, through another killing or some other crime and still would have wound up as an outlaw.

As Northwest Smith and Yarol prepare to return to their fugitive lifestyle our last impression of our antihero is of a man too proud and stubborn to be held in check by … whatever the societal and governmental taboos and mores are in this fictional future. It’s an oddly touching finale and, poetry geek that I am it reminded me of Francois Villon’s verse written while contemplating his scheduled execution on the gallows because of his own career as an outlaw.

That wraps up Balladeer’s Blog’s third look at a neglected Pulp Hero. It’s too bad Moore did not write more Northwest Smith stories. I really enjoyed the almost steampunk nature of the way all the planets of our solar system were either inhabited by or colonized by the Big Three powers of Earth, Mars and Venus. That quaint, old-fashioned appeal melded with their sophisticated sexuality, wild violence and Alien-esque elements of horror in a way that I found very entertaining.

BE HERE NEXT TIME WHEN I BEGIN A STORY-BY- STORY EXAMINATION OF ANOTHER NEGLECTED PULP HERO!