Balladeer’s Blog presents another Top Twenty list for 2020. This time it’s a look at the 20 Best Silver John Stories. If you’re not familiar with this neglected Pulp Hero created by Manly Wade Wellman, Silver John was a wandering musician who battled evil supernatural forces in the Appalachian Mountains of yore. His nickname comes from his pure silver guitar strings and the silver coins he wields in his war against darkness. Think Orpheus meets Kolchak. For more info click HERE 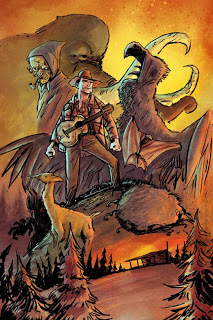 O, UGLY BIRD! – In this debut Silver John story the heroic balladeer squares off against a vile man named Osmer. That villain dominates an isolated mountain community through his ability to send forth his soul in the form of a giant, hideous bird to prey on any who oppose him.

THE DESRICK ON YANDRO – Desricks are old mountain cabins dating back to Colonial times. Such cabins were heavily fortified against potential attacks from hostile Native Americans or wild animals. This particular desrick houses a powerful old witch and is guarded by a virtual army of horrific monsters. Silver John must face the Bammat (the last of the woolly mammoths) and the Toller (a deadly winged creature), plus others called the Culverin, the Flat, the Skim and the Behinder.

CAN THESE BONES LIVE? – After participating in a very unorthodox burial ceremony Silver John spends the night in the cemetery keeping watch over the fresh grave. In the middle of the night the unnaturally large skeleton which was just buried comes to life, bursts free from its coffin and rises from its grave in search of human victims.

NINE YARDS OF OTHER CLOTH – To me this is the best Silver John story of them all. Even if you disagree, this tale is crucial to Silver John lore because it features his first meeting with his eventual wife, the beautiful and courageous Evadare. All the crucial elements are here: a musical performance, an evil factory owner who enslaves his workers through his enchanted fiddle and a pre-Columbian monster called Kalu. Most of the action takes place in an eerie forest filled with trees made of coal-black wood.

WHY THEY’RE NAMED THAT – This Silver John vignette features a Gardinel, another monster from Appalachian folklore. Gardinels are sentient carnivorous plant-life which give the appearance of being a rough lean-to shelter. When unwary travelers lie down to rest within the seeming shelter the Gardinel devours them in their sleep. Sort of a huge variation of the Venus Flytrap.

ONE OTHER – On a nearly inaccessible mountain top Silver John finds a seemingly bottomless pond that is really a portal to another dimension. Our hero has been lured there by a beautiful but evil Southern Belle resentful that John resisted her charms. She plans to sacrifice him to a creature which emerges from the eldritch pond.

OWLS HOOT IN THE DAYTIME – Silver John comes across an isolated mountaintop that is a wasteland of rotted wood and twisted metal. A grizzled, dwarfish figure and his macabre animal companion live there guarding a temple built into the mountain itself. The temple has been sealed for eons and the demonic entity imprisoned within is looking to burst free and ravage the world. 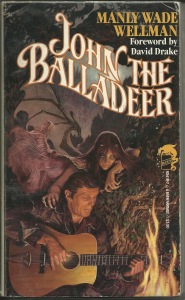 WHERE DID SHE WANDER? – Following his performance at the Trudo Music Festival, Silver John investigates the legend behind a folk song he just learned. The song was about a witch named Becky Til Hoppard who was hanged in 1849. John must fight for his life when he encounters the malformed and deranged descendants of the witch and learns that she herself survived her hanging and rules over her Hills Have Eyes-style clan.

SIN’S DOORWAY – Fleeing from a corrupt sheriff and his deputies, an exhausted Silver John winds up spending the night in the mansion of a dead, evil preacher named Levi Brett. Overnight, John contends with the haunted, sentient mansion as well as its sinister caretaker Dravot, a demented elderly couple who serve as the groundskeepers and Levi’s creature Parway. That creature is a bizarre human/ dog/ monkey hybrid.

TRILL COSTER’S BURDEN – Silver John and his beloved Evadare get married at the end of this memorable story. Prior to the ceremony the couple are drawn into an adventure which finds them spending the night in a creepy graveyard waiting for the forces of Hell to show up and claim the recently-deceased villainess named Trill Coster.

YOU KNOW THE TALE OF HOPH – Silver John meets a female reporter who has come to the Appalachian Mountains to write about him and his legend as a heroic do-gooder. John winds up having to save her from Hoph, a vampire/ werewolf hybrid whose only weakness is silver.

SHIVER IN THE PINES – In between musical gigs, Silver John joins an expedition to Black Pine Hollow, the site of an ancient mine supposedly engineered by a race older than Native Americans. Those horned beings begin to prey on the members of the expedition for daring to probe their mine.

THE SPRING – Silver John encounters a man who guards a mountain spring with waters which can heal any wound or illness. Those same waters can also be used to kill even the most young and healthy, so a witch named Craye Sawtelle tries to seize the spring for her own use. John and the guardian battle Craye and the large Hell-hound given to her by her dark master.

THE LITTLE BLACK TRAIN – While performing with other musicians at a wealthy Southern Belle’s outdoor celebration Silver John finds himself trying to save his alluring but wicked hostess from losing her life to a ghostly train. That pitch- black train with coffin- shaped boxcars runs only at midnight on just one night a year to run down and take the life of a designated sinner … And she’s slated to be this year’s victim.

VANDY, VANDY – Silver John visits a remote mountain community to learn an obscure folk song. While there he must save an innocent family from a supernatural man named Loder. That man practices witchcraft and is hundreds of years old. Not only did he survive the Salem Witch Trials but he also allied himself with Benedict Arnold late in the Revolutionary War.

FIND THE PLACE YOURSELF – The horrific menace in this Silver John tale is a bit old-school – an eerie, isolated cabin in the woods. The cabin itself plus the surrounding woodland seem suffused with an evil, profane presence. This one always puts me in mind of the cabin from the original Evil Dead movie.

NARY SPELL – Silver John participates in the Walnut Gap Beef Shoot, a rifle-shooting competition for an entire quarter of beef. John likes his own chances, since he was the best shot in his division during the war. Unfortunately, among the competitors are two warlocks. One of them uses a skull’s eye-sockets as a mold for his bullets and the other uses bat’s hearts and livers in his gun.

WALK LIKE A MOUNTAIN – Silver John visits a picturesque hill town called Sky Notch. While there he battles a giant man named Rafe Enoch. Rafe is a descendant of the race of giants called the Nephilim and has deadly plans for the innocent townspeople of Sky Notch.

NOBODY EVER GOES THERE – In the town of Trimble, Silver John meets two high school teachers named Mark Banion and Ruth Covel. The trio venture over to the forbidden side of Catch River to investigate the ruins of a textile factory abandoned 75 years earlier. The workers all fell prey to shadowy ancient entities and John tries to use music to drive off those entities like the Native Americans did long ago.

FROGFATHER – This tale features a teenaged Silver John from before he had earned that nickname and before he had even served in the war. John is in Florida and is an indentured servant to an evil man named Ranson Cuff. He, Cuff and their Seminole guide are doing a nighttime hunt for frogs in the swampland and run afoul of Khongabassi, a Seminole god who protects the swamp creatures.