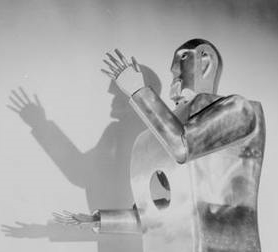 THE AUTOMATIC MAID-OF-ALL-WORK. A POSSIBLE TALE OF THE NEAR FUTURE (1893) – Written by female author M.L. Campbell. Obviously I shortened the title for my blog post headline. Balladeer’s Blog’s look at “ancient” science fiction continues with this 1893 robot story.

Well-to-do John Matheson and his wife are having a hard time keeping a maid. To satisfy his hard to please wife, the inventor works away in his laboratory/ workshop to perfect his new idea: a mechanized “Maid-Of-All-Work” hoping this will solve the domestic staff issue.

The robot is powered by an electrical battery, has a face with numbered buttons to help “program” and operate it, and has arms like windmills. At last the project is completed and Matheson activates the robotic maid.

The android seems to function just fine at first, performing all of its domestic duties efficiently if coldly. John is required to switch around some wires to get the automaton to carry out each separate task, however.

We all know how most robot stories end, though, and soon the Maid-Of-All-Work gets an electronic jolt during one such wire switch and its programming gets scrambled. Anyone or anything in its way as it goes about its chores gets knocked out the way, even the Mathesons.

Eventually the robot goes completely berserk and wreaks havoc. The android trashes the Mathesons’ home then rampages throughout the neighborhood inflicting heavy damage.

At last the robotic reign of terror ends when the maid ends up falling in a local stream.

This story, despite its 1893 date, reads like it is much older. It’s hard to believe this is a Jules Verne-era story given its lack of sophistication but since it’s only a short story and not a novel it’s a lot of fun. I would have loved to see a silent movie adaptation of this tale.