Louis is remembered as a larger than life figure in the court of French King Henry III. He was a deadly swordsman who thumbed his nose at many of the King’s courtiers while laughing at jealous husbands and tailor’s bills as he romped his way in and out of countless beds. He could get away with this because he was the favorite of King Henry III’s younger brother, Francois, the Duke of Anjou.

Even Francois’ patronage was good for only so much, since Henry wielded all the true power and considered Francois a potential rival. While fighting on various battlefields and in assorted duels Louis also walked that tightrope at court, where on any given day one miscalculation or one insult taken too far could bring about his ruin.

One of our main character’s female lovers was Princess Marguerite de Valois, who was King Henry’s sister as well as being a daughter of Catherine de Medici. (This guy had a definite death wish, didn’t he?) The title Countess, Diana de Monsoreau, became another one of the married conquests of de Bussy d’Amboise and – in this novel, anyway – the true love of his life. 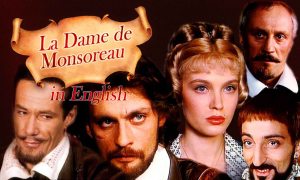 There’s nice 1570s atmosphere but of course Dumas and Maquet didn’t have today’s freedom to delve into Louis’ bisexuality. La Dame de Monsoreau has been adapted but nowhere near as many times as it deserves.