IN SEARCH OF THE UNKNOWN (1904): LIKE A FORERUNNER OF INDIANA JONES 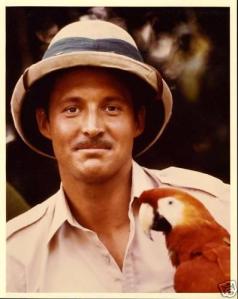 IN SEARCH OF THE UNKNOWN (1904) by Robert W Chambers. Previously Balladeer’s Blog examined Chambers’ underrated horror classic The King in Yellow. The work we’re looking at this time around is a collection of short stories about Francis Gilland the Zoologist. Gilland was a forerunner of the real-life Frank “Bring ’em Back Alive” Buck and the fictional Indiana Jones.

Our daring hero worked for the Bronx Zoological Gardens and was frequently dispatched by Professor Farrago to try to bring in dangerous crypto-zoological specimens or disprove their existence if they were hoaxes. The stories in this volume:

I. THE HARBOR MASTER – Gilland is sent north to Hudson Bay where a Harbor Master has reported capturing a pair of Great Auks, flightless birds which went extinct in the mid-1800s. The two-fisted scholar finds the Great Auks are for real but the Harbor Master harbors (see what I did there) a sinister secret.

This story also features the Harbor Master’s beautiful secretary, who naturally catches Gilland’s eye, and a gilled merman (shades of Creature From The Black Lagoon), who wants to mate with the lovely lady himself. Gilland’s not having it, of course, and must do battle with the creature.

II. IN QUEST OF THE DINGUE – The Graham Glacier melts, unleashing a number of animals from species that were long thought extinct. Among the crowd of academics converging on the unexplored area are Gilland and Professor Smawl. The Professor is a sexy, strong-willed female scholar that our hero has been forced to accompany into the region.

The battle of the sexes bickering flies like shrapnel as the pair encounter Woolly Mammoths and other creatures, find a primitive bell called a dingue and run afoul of a gigantic super-powered woman who calls herself the Spirit of the North.

III. IS THE UX EXTINCT? – Gilland is the official representative of the Bronx Zoo at the International Scientific Congress in Paris. Once again our hero’s eye for the ladies gets him into trouble when he defends the Countess d’Alzette from the ridicule of the assembled scholars.

The beautiful Countess claimed that she could prove the existence of Tasmania’s legendary giant bird the Ux. It turned out that she even unearthed Ux eggs which hatch prematurely and unleash Kaiju-sized flying predators on the City of Lights.

IV. FARRAGO’S FATE – Professor Farrago accompanies Gilland and Miss Harrison to the Florida Everglades on a mysterious mission. Gradually Farrago reveals that they are there on the trail of invisible humanoid life-forms.

The expedition sets out food to use as bait, hoping to lure the creatures into the steel cage they brought with them. The invisible beings turn out to be real, but spring a pair of surprises on Gilland and friends, surprises I wouldn’t dream of spoiling.

V. A MATTER OF INTEREST – Robert W Chambers eats his own young with this closing story, basically recycling a story he used in an earlier volume titled The Mystery of Choice in 1898. He inserts Gilland into the tale, however.

In the marshes of Long Island the preserved corpse of a Thermosaurus – a fictional dinosaur – is discovered. Electrical charges inadvertently bring the enormous dinosaur back to life.

FOR WASHINGTON IRVING’S 1809 depiction of an invasion from the moon click here:    https://glitternight.com/2014/05/05/ancient-science-fiction-the-men-of-the-moon-1809-by-washington-irving/

2 responses to “IN SEARCH OF THE UNKNOWN (1904): LIKE A FORERUNNER OF INDIANA JONES”