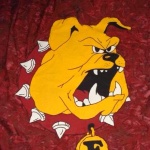 A fierce, furious opening Half ended with the Bulldogs clinging to a 39-37 edge over the Wolves. The 2nd Half saw the two teams put up exactly 32 points each, as Ferris State won their first ever National Championship by a score of 71-69. Zach Hankins led the victors with his 19 points.  * THE BULLDOGS ARE CHAMPIONS OF NCAA DIVISION TWO *

CHAMPIONSHIP GAME – This was that rarest of things: a National Championship Game between two Double-Digit seeds, in this case the 13th seeded SOUTH PLAINS COLLEGE TEXANS and the 10 seeds – the COLLEGE OF SOUTHERN IDAHO GOLDEN EAGLES.

By Halftime the Texans mustered a 51-50 advantage over the Golden Eagles. After that the points continued to fly like shrapnel, with South Plains College getting just a little more separation from their opponents for a 98-85 triumph. Twenty-one points from Deshawn Corprew led his team.  * THE TEXANS ARE CHAMPIONS OF THE NJCAA *