This volume of The Flashman Papers is set right after Harry’s unsuccessful attempt to spirit away Mexico’s overthrown Emperor Maximilian before he could be executed. (Well it wasn’t Flashman’s fault. As history tells us, Maximilian DID refuse to escape with the conspirators who busted in to save his sorry butt.)

Synopsis: After a passionate farewell kiss from (the real-life) Princess Agnes Salm-Salm, Harry Flashman further raises the ire of his Austrian escorts by seducing a young, blonde and buxom Hapsburg aristocrat on the trans-Atlantic voyage with Maximilian’s coffin.

In Trieste, with the Austrians planning to unleash their wrath on Flashman as soon as the ceremony for Maximilian is over, our main character bolts for the British consulate. HMG is happy to have Sir Harry on hand and entrusts him to escort the notorious 100,000 Maria Theresa Thalers being sent to finance General Robert Napier’s upcoming Abyssinian Expedition. 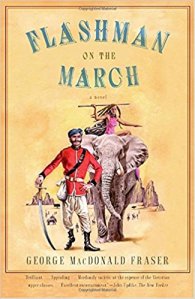 That expedition is being launched to free British captives being held and tortured by the (historically) unhinged Emperor Theodore II of Abyssinia (Called Ethiopia today).

Before Colonel Flashman knows it he’s caught up in a clash with Muslim slavers on the Red Sea, then breezing right along to the Eritrean port of Zula, embarkation point for the British campaign into Abyssinia.

The author George MacDonald Fraser’s descriptive talents were in top form in Flashman on the March. As fans well know, Fraser creates scenes in the reader’s mind that surpass the biggest-budgeted cinematic blockbusters.

This particular tale lets him fully unleash his genius for seeming to take his audience to faraway planets while never leaving the Earth. Abyssinia/ Ethiopia feels menacingly alien and its hostile terrain might as well be on an orbiting asteroid as we get dragged into deadly danger with the reluctant Flashman.

Harry and his Royal Marine escorts eventually catch up with General Napier far inland, and even though our protagonist officially turns over the shipment of Thalers he is still at Napier’s mercy in terms of papers and transit orders home to England.

With the British forces – complete with 44 war elephants from India – moving more slowly than anticipated, Napier decides to send Flashman on ahead of the main army.

Harry’s orders: a) to rescue the hostages by any means necessary if the opportunity presents itself, if not, then b) to covertly keep tabs on the location of the hostages in case the Emperor decides to take them even further inland and c) to feel out Theodore’s many enemies in the war-torn country and try to recruit ad hoc allies to prevent the Emperor’s army from escaping.

Flashman’s guide, translator and fellow warrior will be the beautiful Ethiopian woman Uliba-Wark, half-sister to the country’s Queen. Uliba-Wark has a small domain of her own and is up to her neck in Abyssinia’s countless political and sexual intrigues & rivalries.

A running battle on horseback which leaves Harry and the warlike beauty as the sole survivors enroute to her castle is just a hint of the wild bed and battle action that lays ahead.

Harry’s other leading ladies in this Abyssinian romp include Malee, Uliba-Wark’s scheming friend and sexual rival plus a coterie of gorgeous serving maids who hungrily heap attention on the willing Flashman since the rest of their men are away at war or already killed off.

In other types of action Flashman – armed with pistols and with an Abyssinian sword that dates back to the Crusades – finds himself battling invaders of his ally’s castle, chased over a majestic waterfall to certain doom, trying to survive in a vault filled with a veritable army of yellow scorpions, fed inch by inch into a roaring fire and dangling upside-down in a cage suspended a half-mile above an Ethiopian valley.

And of course none of Harry’s adventures would be complete without real-life atrocities perpetrated by the ruling class of every country he travels through. Among Emperor Theodore’s grisliest works: a real-life “forest” of hundreds of crucifixes on which he eliminated untold numbers of his subjects in Gondar.

Nor would Flashman’s adventures be complete without loot and plunder, this time featuring not just the usual jewels and precious metals but also tabots and other religious relics, some possibly dating back to the time of the mythical Ten Commandments!

And did I mention Emperor Theodore’s (real-life) imported German-built giant of a cannon, affectionately named after the Siege of Sevastopol? And nary an exhaust-vent to be found in that castle-destroying Death Star of the 1800s. Toss in Harry’s final confrontation with the Emperor … A confrontation only one of them can survive.

Naturally our beloved rogue (with apologies to John Barrymore) comes through it all with his skin intact and spouting his typically trenchant observations about history, politics and human nature.

Sadly, this twelfth Flashman novel was the last one completed by George MacDonald Fraser before his death in 2008. I don’t think any other writer will ever be able to match his brilliant way of blending fact, fiction and satirical subtext.

Flashman on the March enabled the series to go out on a very high note after two disappointing outings in 1994 and 1999.

I’ve long described Fraser’s Flashman stories as “like science fiction in reverse” since he used sci-fi methods of messaging but for tales set long ago instead of in a hypothetical future.

Favorite Book Blurbs: “As bawdy, offensive and unrepentantly entertaining as always.” And “Mordantly satirical at the expense of the Victorian upper classes.”

FOR MY TAKE ON WILL JORDAN’S RYAN DRAKE NOVELS CLICK HERE.