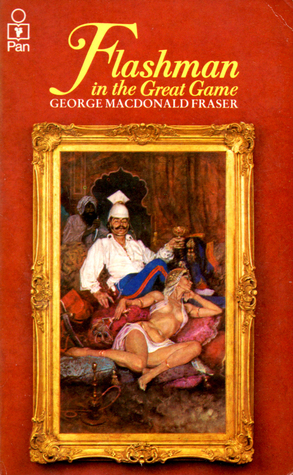 This Flashman novel comes in a very close second to my top selection, which I examined last time around. Ultimately the way that a portion of Flashman in the Great Game gets a wee bit unfocused relegated it to the Number 2 spot.

Synopsis: As the title indicates, this time around Harry Flashman, the most self-serving and roguish Cavalry Officer in Queen Victoria’s army, gets caught up in what diplomats of the 1800s called “The Great Game.” Said game involved the figurative chess match played by Great Britain, Russia and other powers as they all angled to extend or maintain their power and influence in Central Asia, especially India. 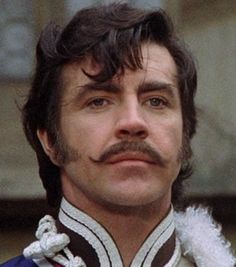 Lord Palmerston of Her Majesty’s Government is wary of a potential uprising among the Indian troops employed by the British East India Company and of Russian interference in the form of Flashman’s old foe, (the real life) Count Ignatieff.

Once again the fate of nations rests on the thoroughly unreliable shoulders of Harry Paget Flashman. (See pic of Alan Bates at left)

In India our swashbuckling protagonist struggles to stay alive amid assassination attempts by Russian agents while vying with Count Ignatieff for political influence in the court of (the real life) Lakshmibai, the Rani of Jhansi. (See pic of Laila Rouass to the right)

Lakshmibai’s overwhelming beauty, feisty spirit, skill at horsemanship and magnificent fencing abilities make her one of the few women to actually tug at Flashman’s heart and not just his man-parts.

In real life many prudish British politicians of the time called her “The Jezebel of Jhansi” over her sexual openness but such a derogatory nickname would only enhance her standing in the eyes of the lustful Colonel Flashman.

The widowed Lakshmibai and our hero flirt and bicker and Harry is so smitten he even tries to help his beautiful hostess keep the throne of Jhansi by offering her excellent advice. He feels that the dazzling Lakshmibai should visit Queen Victoria personally and negotiate for her kingdom’s status.

Flashman (like a few real-life figures of the time) is convinced that the Rani would impress the Queen and would charm many of his fellow Brits to the point where major success would be hers. Tragically, Lakshmibai cannot travel over water without losing caste among her Marathi subjects, and so must decline.

Shortly after Harry and the Rani’s love affair is consummated, our main character finds himself targeted by Thuggee Cultists on top of the Russian agents. Lakshmibai’s already-legendary status makes it an abomination to the Thuggees that a Britisher would dare to couple with her, so they mark Harry for death over the love affair.

(NOTE: Given Lakshmibai’s revered status in Indian history, where she shines like the Trung Sisters in Vietnamese history, the author George MacDonald Fraser permits huffy readers who are so inclined, to pretend Flashman is actually having sex with a Queen Amidala-style Royal Body Double of Lakshmibai.)

At any rate larger events intervene. The Great Mutiny breaks out, with various regions of India rising up to try to drive out the British. Many Indian troops fight on the British side, sometimes pitting long-time friends and allies against each other.

Because the conflict mixed elements of race, politics AND religion it was marked by outrageously excessive violence against non-combatants. Both sides were guilty of some of the most appalling atrocities imaginable.

As reprisals followed ever-bloodier and inhumane reprisals our normally cagey antihero Harry Flashman was forced to use his sword and pistols just to stay alive … and to escape fates even WORSE than death. At one point Harry finds himself in waters crawling with crocodiles while enemy Sepoys line the riverbank waiting to kill or torture any Brits who escape the crocs.

From Jhansi to Meerut, from Cawnpore to Lucknow and many other blood-stained locales Flashman strains every fiber of his black-hearted being to survive. On the side his larcenous nature leads him to engage in some of the plundering. Hardcore Flashman fans will recall that his haul of loot from the Great Mutiny paid for his plush Gandamack Lodge.

If done as a movie Flashman in the Great Game, with its brutality and inhumanity on all sides, would slide easily into the style of the grittiest Spaghetti Westerns but with some swordplay mixed in with all the firearm use. The intensity would be lightened here and there by Flashman’s roguish nature, similar to Italo-Western characters like Trinity, Hallelujah and Sacramento.

Eventually Harry’s military superiors want him to covertly return to Rani Lakshmibai’s now-besieged domain. She has been fighting on the rebel side since early in the war and Flashman is sent in to try to lure the hard-fighting, militarily brilliant and savvy Rani out.

As another indication that our main character really has fallen under Lakshmibai’s spell, Fraser hints that Harry’s desire to see the Rani again makes him see the mission through, despite his usual underhanded ways of evading duty to save his own skin.

The imperial beauty is delighted to see Colonel Flashman again, too. Luckily he never has to make a choice between luring her out for surrender or ignoring his orders. Lakshmibai is about to flee Jhansi Fort so she and her accompanying soldiers take our lovesick – and now captive – protagonist along with them via a secret tunnel, thus bypassing the besieging British forces.

From there events hurl toward the Battle of Gwalior, at which Lakshmibai met her real-life end while leading her troops. The final scene between Flashman and the Rani has a poignance that is usually lacking in the lustful rogue’s goodbyes with his leading ladies.

Once the Rani is slain in battle and her forces overcome, Flashman’s presence at her side leads to him being knocked out by the victorious Brits and mistaken for one of the rebel troops.

When Harry comes to he finds himself gagged and strapped across the mouth of a loaded cannon about to fire, just like several other of Lakshmibai’s soldiers-turned-prisoners. This cruel method of execution WAS used on POW’s at a few locations during the Great Mutiny.

It was not done at Gwalior and Fraser cleverly pretends Flashman is the reason why. Not only does our wily hero succeed in getting out of the death-trap with no time to spare, but – in an uncharacteristic show of compassion – he defies all the other British officers present and has the other prisoners untied from the long line of cannon mouths and set free.

Epilogue: Though initially it looks like Flashman may be in danger of a court-martial over his merciful sparing of the Gwalior prisoners, the Great Mutiny has largely ended now that Lakshmibai has been defeated. (The Battle of Gwalior concluded on June 20th, 1858 and the peace treaty was signed July 8th. Scattered fighting would flare up throughout India until late October.)

Passions cool and Queen Victoria decrees that Harry be awarded a Victoria Cross AND a Knighthood for his dashing – albeit reluctant – service in the war.

In typically irreverent Flashman fashion our antihero inwardly laughs at what he considers the outrageous, overdone tackiness of Queen Victoria granting him BOTH a VC AND a Knighthood all at once.

In a way this should have been the last Flashman story chronologically. Ruthless and amoral Harry had a figurative “Han Solo coming back to help Luke” moment at the end by acting entirely against type in sparing the prisoners. Coupled with his obvious tender regard for Lakshmibai – he even gets emotional at the sight of the statue her people erected of her – Flashman seems like a changed man near the end of this story.

Adding to the feeling of finality is the way that, rather than have his life flash before his eyes in the brief moments Harry has before the cannon fires and rends his body to pieces, the British rogue is instead treated to a long line of images … mental images of his more colorful friends and foes from previous exploits.

Fraser’s writing presents this wonderfully, making it evocative but not maudlin. Especially effective is the way Flashman is figuratively inspired with a means of saving himself by the final image from his Rogues Gallery: the most Flashmanesque of his many foes, the dashing and rakish Count Rudi Von Starnberg of Hungary. That master-stroke cements the feeling of introspective closure to Harry’s adventures.

But obviously that’s not my call to make. Suffice it to say Flashman in the Great Game is a brilliant novel but it should NOT be your first exposure to this fictional figure. Familiarity with Harry’s normally scurvy character is necessary to fully appreciate how affected he is by the events of the Great Mutiny.

Favorite Book Blurb: “Fraser spares the reader nothing, immersing us in one of the most brutal and merciless conflicts of the 19th Century. As atrocities pile up on both sides the war degenerates into a blood-drenched morass of moral ambiguity from which even a black-hearted, double-crossing, bottom-dealing rogue like Harry Flashman can emerge on the side of the angels.”